Shares of Alphabet Inc. (NASDAQ: GOOGL), the technology giant behind the Google search engine, plunged on Tuesday after the company’s latest financial results failed to live up to expectations. The stock collapse wiped more than $70 billion off Alphabet’s market cap and reversed much of the early progress seen in 2019.

Alphabet’s stock began its long retreat in after-hours trading on Monday after the company reported mixed quarterly results. The technology giant achieved per-share earnings of $11.90, which was well above the median forecast of $10.61. However, revenues came in at $36.34 billion, which were well below the expected $37.33 billion.

A deeper dive into the sales figures revealed a more troubling trend – namely, advertising revenue growth declined for a fourth consecutive quarter. Between January and March, Google’s ad revenues climbed just 15.31% compared with 19.86% in the fourth quarter and 24.43% a year ago. Paid clicks reported a 39% increase in revenue but that pales in comparison to the fourth-quarter gain of 66%.

Alphabet’s chief financial executive Ruth Porat disclosed via the earnings call that most of the slowdown in ad revenue was tied to YouTube, which “represents the vast majority of total clicks.”

Despite the slowdown, the company maintained strong profitability in the face of a large fine from the European Union (EU). Alphabet was fined $1.7 billion as part of a settlement for undermining competition in the market for online advertising.

At the beginning of the year, analysts and market participants were debating which tech company would be next to cross the $1 trillion market cap plateau after Apple briefly achieved that feat in mid-2018. Alphabet seemed to be on track to reach that milestone before the current selloff began. Meanwhile, software giant Microsoft surpassed $1 trillion in value for the first time last week.

As of Tuesday, Alphabet’s market cap was about $100 billion shy of the $1 trillion market cap. It has since fallen by over $70 billion to $822 billion, based on latest available data. The selloff in GOOGL shares has impacted other segments of the market, with the Nasdaq Composite Index falling from record highs. 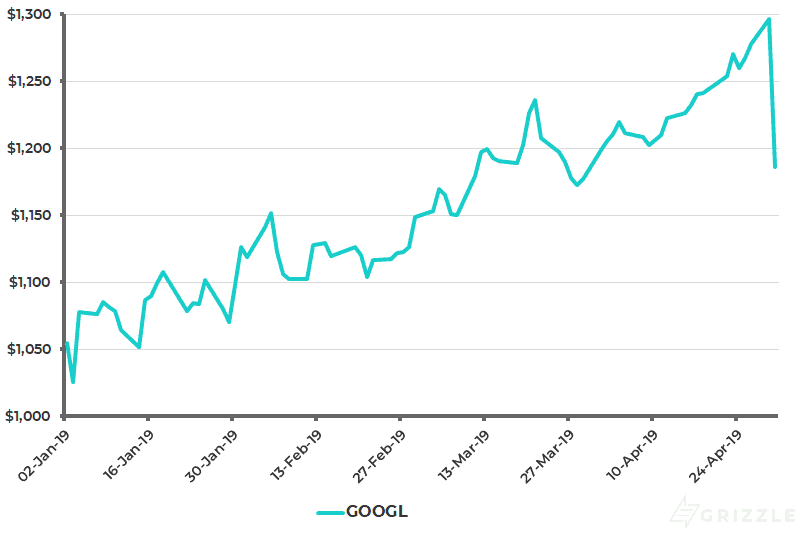 Alphabet has acknowledged that the days of peak advertising growth have likely passed. It has since prioritized other business segments, such as hardware and cloud-based services, to sustain future growth. This so-called “other revenues” segment reported a 25% increase in the latest quarter, so there’s still hope that the company can shake off slowing sales growth.

Disclaimer: Author holds no investment position in Alphabet Inc. at the time of writing.

Sam Bourgi has more than nine years of experience in economic analysis, market research and financial writing. His work has been featured in and cited by some of the world’s leading newscasts, including Barron’s CBOE and Forbes. At Grizzle, he explores the intersection between technology and finance, as well as emerging sectors. He obtained his MA from McMaster University in Canada.