Aphria (APHA) Earnings – The Best of an Uninspiring Bunch

If you want a perfect example of how quickly the cannabis industry moves, look no further than Aphria (NYSE: APHA, TSE: APHA).

Nine months ago every armchair cannabis investor said Aphria was going to zero and the company was a stain on the industry’s reputation.

Fast forward to today, Aphria is matching Organigram for the industry’s best results, and many FinTwit investors were looking to Aphria to rescue the industry from the ongoing selloff.

In the stock market you are only as good as your last quarterly earnings report, for good or bad.

To be clear, a 2% revenue decline, even if cannabis revenue grew 8% is not going to win any awards from investors.

Neither will positive earnings results that came from other income and positive changes in the value of plants.

However, every quarter that goes by, investors are reminded Aphria is far from worthless and is operating better than peers like Cronos, Canopy, and Aurora who trade at three to four times the multiple.

The valuation gap is going to close sooner or later which is why Aphria is a core holding in our cannabis portfolio.

For those who have the ability to short, our recommended trade of buying Aphria and shorting Aurora is hands down the best trade in cannabis.

You remove the risk that cannabis stocks go lower from a slow Canadian roll-out, but you benefit from the difference in profitability, liquidity and valuation between the two companies.

Aphria has almost two years of cash while Aurora is down to six months. Aphria is closer to profitability, has the same cost of supply and trades at a massive discount to Aurora. Aurora will also be facing a big writedown at year end in our opinion. One way or another, the valuation gap will close.

Aphria offers investors a best in class operator with industry leading profitability, costs structure and liquidity trading at a huge discount to everyone else.

We are getting closer to the point where Aphria’s crazy discount cannot be explained away, and when that time comes, we could be looking at a new cannabis sector bellwether.

Sales were down 2% this quarter driven by the distribution business.

Cannabis sales increased 8% which is good, but less than the 14% growth the overall market is tracking to for the same time period.

Medical revenue per gram declined partially due to the fire at Broken Coast, its high-cost brand.

Recreational results again were strong with pricing up 5% even with the fire at Broken Coast.

Revenue Per Gram of Cannabis Produced 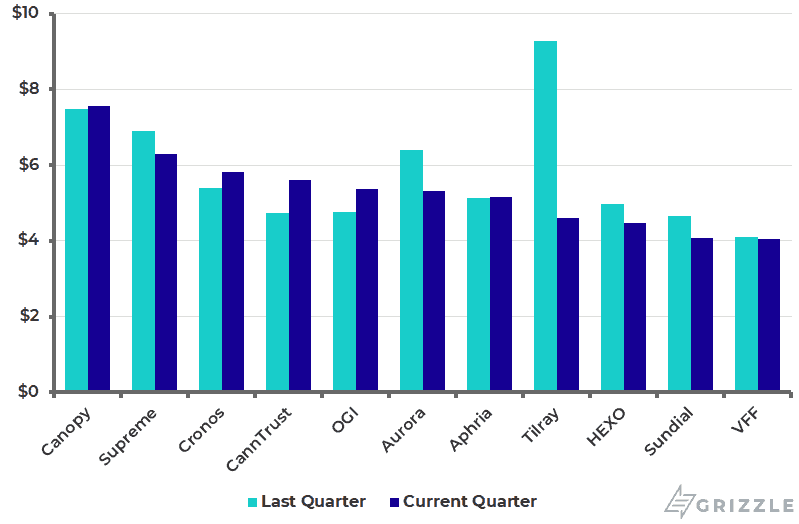 Production costs for cannabis are now $2.6 per gram but should continue falling with Aphria One running at full capacity and Aphria Diamond very close to being licensed.

Overall, their per gram production cost of $2.60 is in line with peers but should fall to the lowest in the group once cannabis 2.0 sales begin to flow through.

Aphria now generates $2.60/gram of gross margin and is tied as the most profitable large grower with OGI and Aurora. Only Village Farms is more profitable and they have less unlicensed capacity pushing up the cost of production.

The ramp-up of Aphria Diamond may lead to lower gross margins through the rest of the year, but we expect Aphria will return to class-leading margins with the rollout of cannabis 2.0 in early 2020. 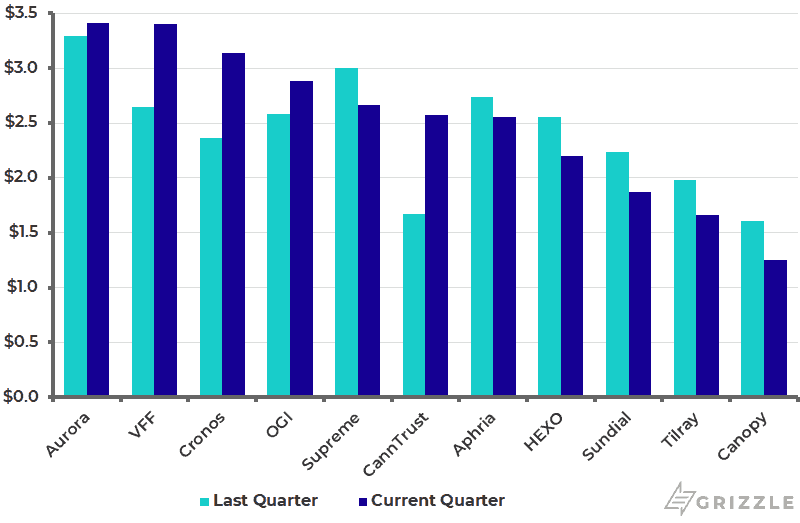 In the end, Aphria generated an EBITDA loss of -$3.2 million, which is third best behind Organigram and Village Farms.

EBITDA Per Gram of Cannabis Produced 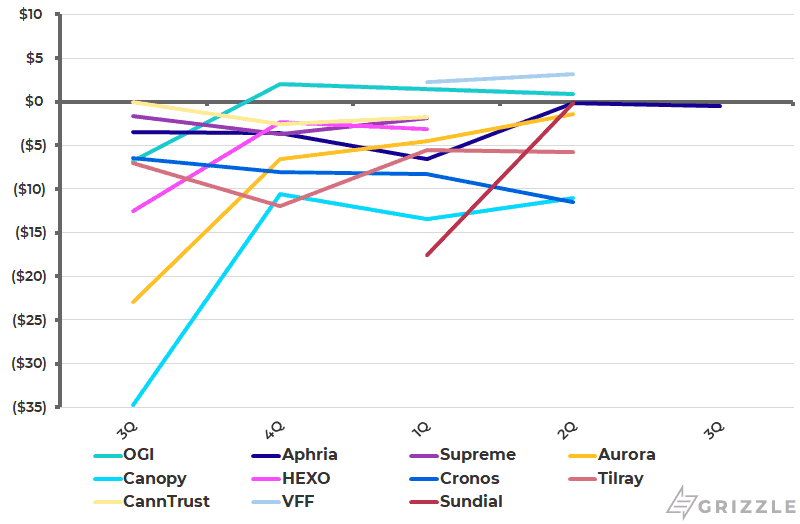 Aphria Is a Steal at the Current Valuation

Aphria continues to look like a screaming buy at a ~75% discount to Canopy, Aurora, and Tilray and a 50% discount to the group average.

After another quarter of better than average results, there is less of a reason why the company should be trading at such a huge discount to peers.

The company has half a billion dollars of cash to weather any storm, and the growing capacity to match the largest LPs in the sector.

Given that the company is guiding to $90 million of EBITDA in 2020, we now have a feel for where other growers may come in compared to their potential.

If we apply the same haircut to all of the other companies, Aphria continues to look like a screaming buy at a 75% discount to Canopy, Aurora, and Tilray and a 50% discount to the group average.

Even if we apply no haircut at all, Aphria trades at a 25% discount to Canopy, Aurora, and Tilray.

Now that operational hiccups are out of the way, Aphria is hands down the most compelling catch up trade in cannabis.