Shares of Apple Inc. (NASDAQ: AAPL) are rising this week despite an ominous downgrade from a Wall Street investment firm. According to Rosenblatt Securities, Apple’s outlook will deteriorate over the next 6 to 12 months as iPhone and service revenues begin to decelerate.

Jun Zhang, a securities analyst at Rosenblatt, issued a rare downgrade of Apple stock in a note to clients on Monday. The analyst warned of another year of “deterioration” for the California-based tech giant due to slower iPhone sales.

“We believe Apple reduced iPhone XR production for Q3 in order to prepare for the ramp of the new iPhone models and because of weakness in sales in Q2,” Zhang told clients, as reported by Business Insider.

Zhang acknowledged that hardware and service revenues could make up for the shortfall in iPhone sales, but that it was far from guaranteed.

Rosenblatt downgraded the stock to “sell” from “neutral” but maintained its price target of $150. That’s 26% lower than current values. 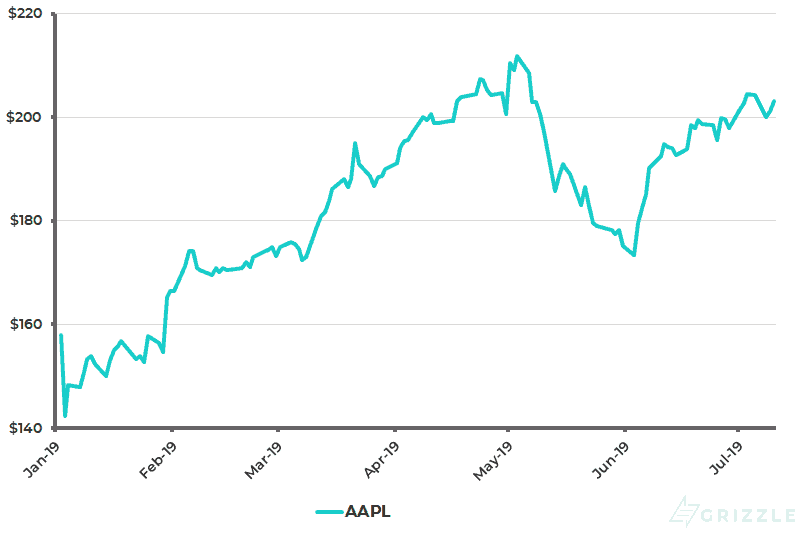 While investors should be encouraged by Apple’s multiple revenue streams, the company remains largely dictated by the iPhone cycle.

The iPhone maker rattled investors in January by slashing quarterly sales projections for the first time in 15 years. The reason: Weak China sales and the erosion of market share in the world’s second-largest economy.

Apple followed up the grim warning by posting its first year-over-year holiday sales decline in almost two decades. It followed that up with a better than expected second quarter thanks to record-high service revenues.

But stronger service couldn’t mask the sharp slowdown in China sales, as iPhone shipments to the country declined for a second consecutive quarter. Analysts expect Huawei to remain well ahead of Apple this year. The Chinese telecommunications giant now accounts for 17% of the global smartphone market.

Apple is scheduled to release its next quarterly earnings report July 30. The consensus EPS forecast is $2.12, down from $2.34 a year ago, according to Zacks Investment Research.

While investors should be encouraged by Apple’s multiple revenue streams, the company remains largely dictated by the iPhone cycle. Less compelling releases in recent years have put a damper on the best-selling smartphone. Some analysts believe Apple’s best chance to make a splash will be in 2020 when 5G technology is rolled out.

Apple and the broader U.S. stock market are riding high on expectations that the Federal Reserve will lower interest rates, perhaps multiple times, this year. Against this backdrop, concerns about peak iPhone and lost Chinese market share won’t impact Apple’s stock price — at least, not for now.

Disclaimer: Author holds no investment position in Apple at the time of writing.

Sam Bourgi has more than nine years of experience in economic analysis, market research and financial writing. His work has been featured in and cited by some of the world’s leading newscasts, including Barron’s CBOE and Forbes. At Grizzle, he explores the intersection between technology and finance, as well as emerging sectors. He obtained his MA from McMaster University in Canada.