A brand new industry with such strong growth trends shouldn’t be seeing declining sales. A decline in sales tells us demand for the current products on the market (flower and diluted oil) have been met. Increasing sales will be harder to come by without the rollout of new products.

StatCan’s reported retail sales are down to $122.92 million in September from a record-high of $125.95 million in August.

September sales are still higher than those reported in July, but this marks the first recorded decline in a market that is being pitched as hyper-growth by cannabis management teams. The only way stock multiples in the sector make sense right now is if revenue growth can continue at 100%+ a year.

Although Quebec, Saskatchewan, Manitoba, Alberta, and British Columbia continued on a slight upward trajectory in sales, every other province and territory fell, contributing to the 3% overall nationwide reduction.

The largest decline by far was in New Brunswick where retail sales fell 40% from the month before. We will be looking for a good explanation for such a huge fall in demand. 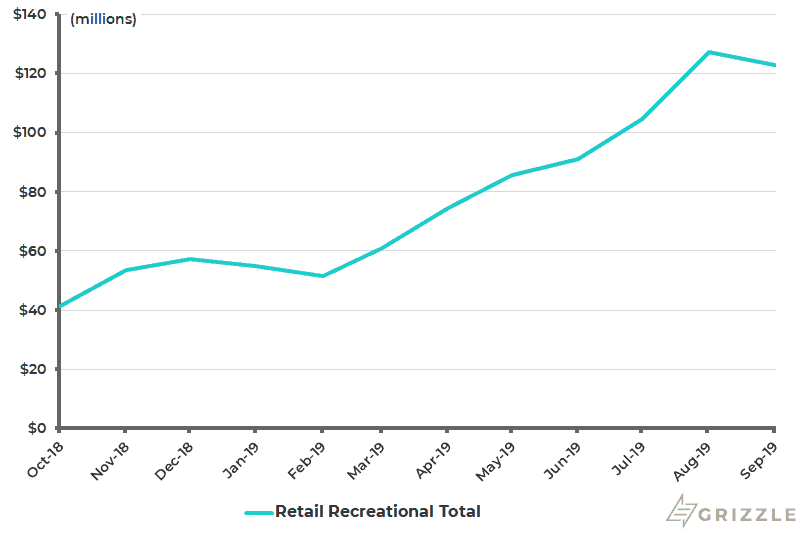 Despite stock prices taking off just after legalization last October, extremely aggressive investor growth estimates have failed to materialize in the overall legalized industry, with stock prices across the board plummeting since April.

Although several major licensed producers have seen increased revenues in their Q3 financial reports, most are still not profitable and are running low on cash.

Major licensed producers are now looking towards the launch of so-called “cannabis 2.0” products as a means of bringing in extra revenue in the coming months.

Now that Health Canada regulations have arrived, a variety of newly legalized edibles, vapes, and infused beverages are due to start hitting shelves in late December.

The fate of that latter category — once seen as a major money maker — remains up in the air, as the pace of new collaborations between the industry and major beverage companies has significantly slowed in the last nine months.

Grizzle is currently looking into the potential of cannabis 2.0 products to save the profitability and growth of the industry and will be reporting our findings shortly.