Canopy Growth Earnings Prove the Growth is Gone Until 2020

Canopy Growth investors have a problem….

Canopy has officially gone ex-growth in Canada with revenue down 10% over last quarter while competitors like Aphria are growing Canadian revenue 100%+ and eating Canopy’s lunch.

Slow growth in countrywide sales and a loss in market share almost guarantee growth will be non-existent for the next 6 months until edibles, vape pens, and topicals hit the market early next year.

Canopy will have to buy growth through additional mergers if it wants to show the market noticeable revenue growth for the next two quarters.

With $3 billion of cash in the bank, Canopy can afford to sit and wait, but when you are trading at more than 100x next year’s EBITDA, investors expect growth.

As a smart investor, you should be asking yourself why you are paying 30x sales for a single-digit growth, money-losing company like Canopy, when you can own high-tech stocks like Slack or Pinterest growing at 60% a year for only 17x-20x revenue?

At a minimum, we expect the multiple investors are willing to pay for Canopy will fall over the next two quarters, dragging the stock price with it and causing it to underperform U.S. stocks like Trulieve, a company growing at 30% a quarter and solidly profitable.

With significant write-downs to come in our opinion and the company still searching for its next leader, we recommend investors steer clear of this stock until early next year when the rollout of edibles and vape pens should reignite sector growth. 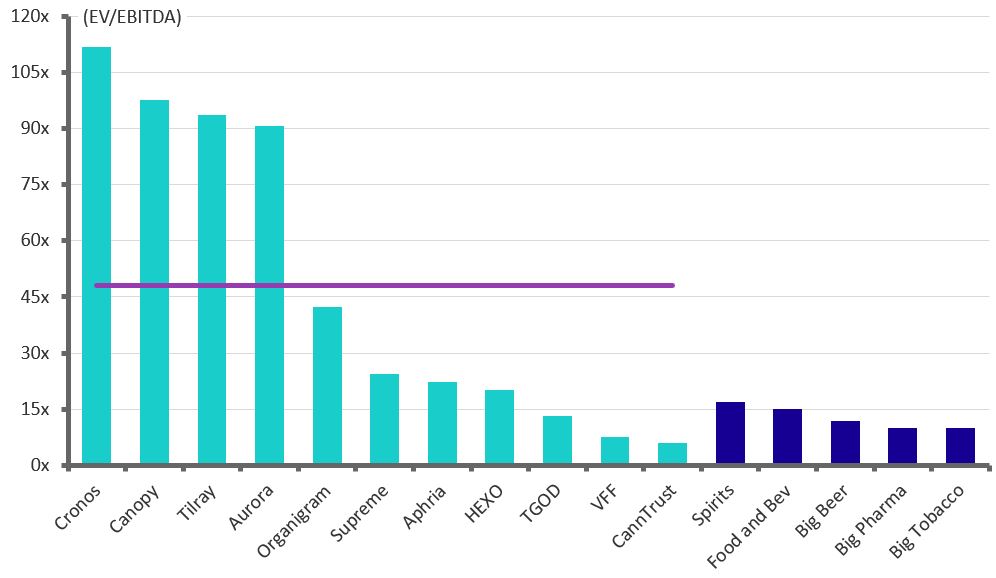 A Reminder on Why Write-downs Are Inevitable

Highlighting only one of Linton’s many deals should make it obvious there is significant write-down risk in the Canopy portfolio.

Canopy paid C$270 million for Tokyo Smoke, a set of seven coffee shops. Goodwill and intangible assets made up more than 90% of the deal.

Given that Aphria wrote off C$50 million, or 25% of the purchase price of their entire LATAM portfolio, made up of much higher quality distribution assets, unique licenses, and greenhouses, we can almost guarantee some big Tokyo Smoke write-downs are coming.

Canopy spent $1.6 billion in the last 12 months on acquisitions and is sitting with over $2 billion of goodwill and intangibles on the balance sheet, a full 50% of assets when you exclude the huge cash pile from Constellation.

Value of Goodwill and Intangible Assets 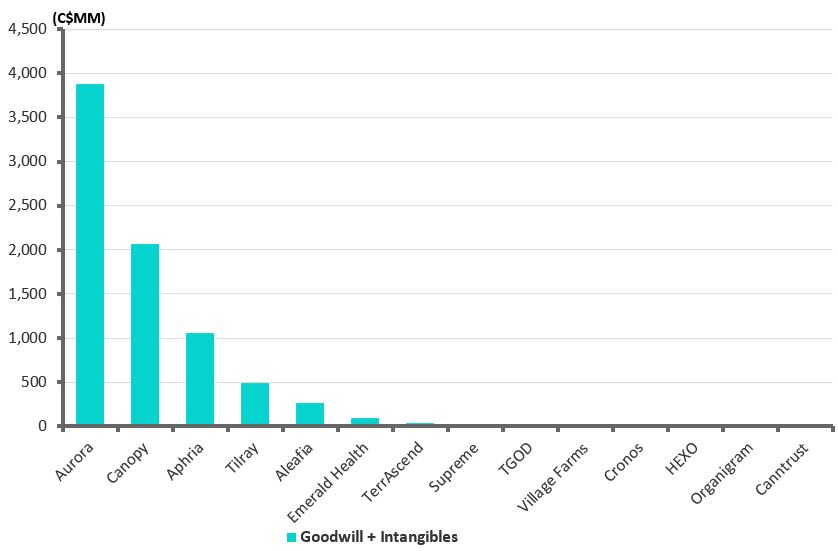 With Linton’s track record of overpaying for assets that support the promotional story he wanted to tell, we expect the new management team will be quick to write off legacy assets once the end of year reporting rolls around.

New CEOs always like to start with a clean slate.

Canopy generated net revenue of $90.4 million in the quarter, down 4% from last quarter’s revenue of $94.1 million and 12% below consensus estimates of $103 million.

Revenue from Canada was down 10%, but the company got bailed out by their recent purchase of a German drug company which contributed $9 million or 10% of revenue in the quarter.

C3, the new German acquisition will contribute another $4.4 million next quarter so Canopy should show revenue growth of at least 5% next quarter even if Canada goes nowhere.

Revenue per gram was a huge disappointment with recreational pricing down 13% over last quarter likely due to consumers choosing cheaper product options. 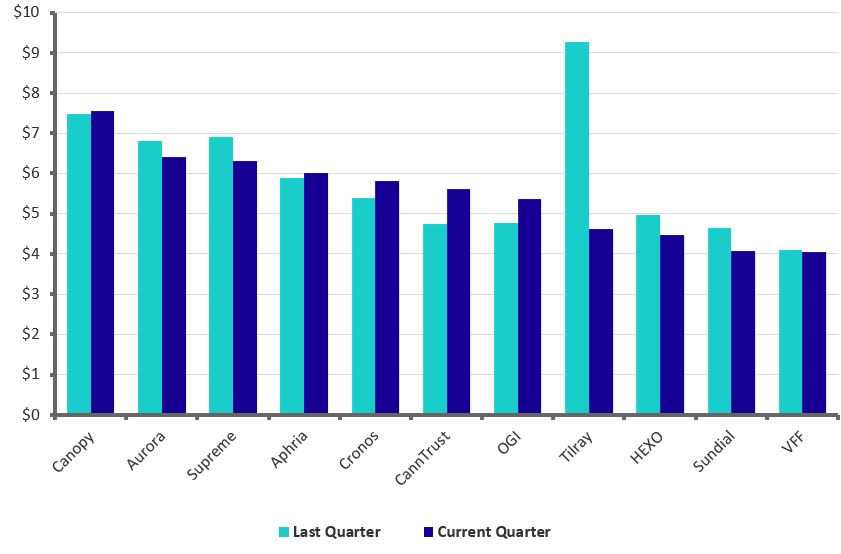 Canopy’s quarterly production costs decreased for the first time in as long as we can remember, falling 2% to $77.3 million. Among peers, they continue to have the highest cost structure in the industry at $6.40/gram. 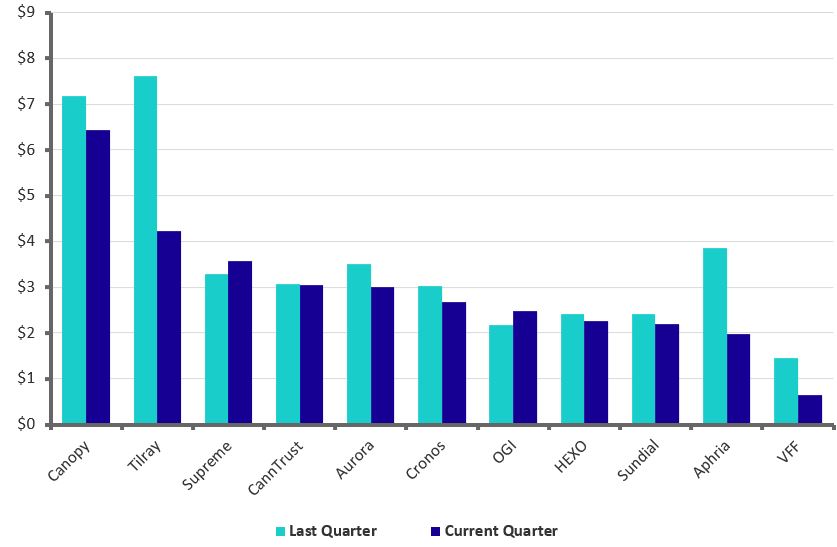 Gross profit for the quarter was $13 million, down 12% from last quarter because revenue declined more than costs. Canopy continues to generate the lowest gross margin in the peer group, negating the benefit of having the highest revenue per gram. 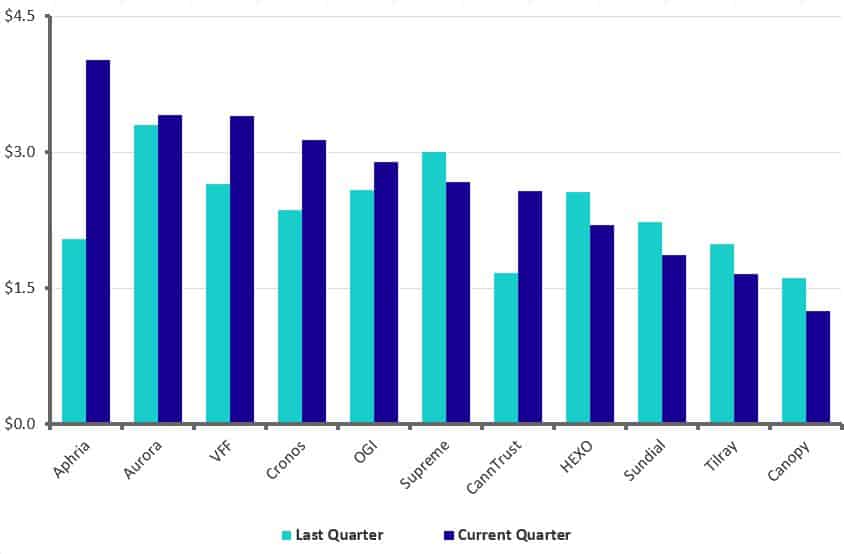 General operational costs were $129.9 million, down 8% quarter over quarter. This was largely driven by decreases in headcount and marketing expenses. On a per gram basis, they continue to spend the most among peers at $12 per gram, a 18% decrease over last quarter.

General and Administrative Costs Per Gram 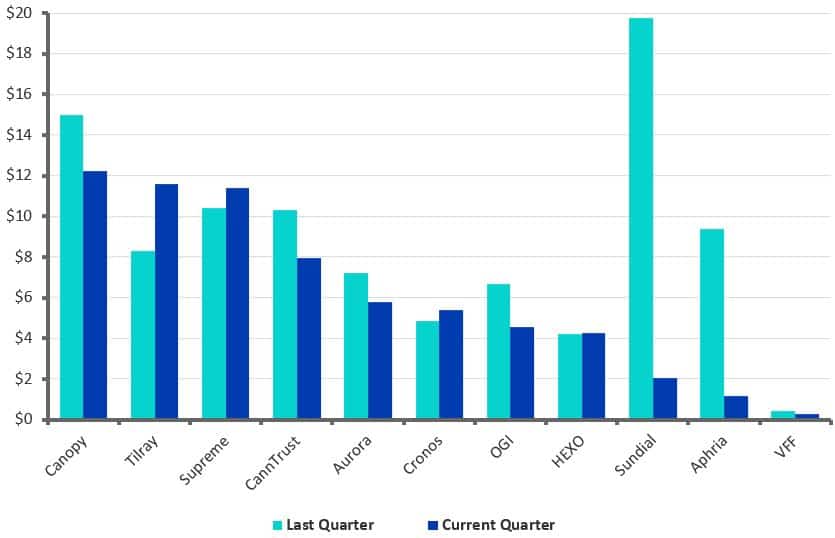 This left a quarterly EBITDA loss of $115 million. This represented a 7% decrease, but Canopy still has the largest per gram deficit in the group. 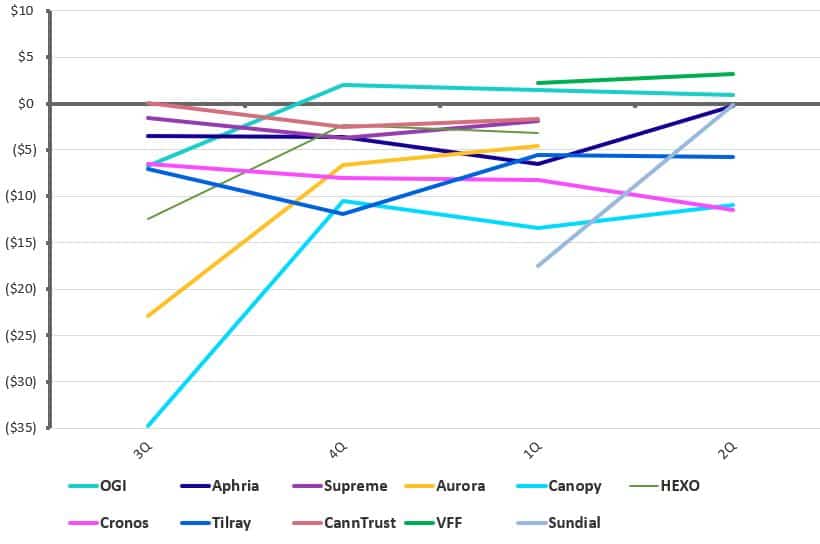 While Canopy is still flush with cash from Constellation Brands, at the current cash burn rate the $3.1 billion will run out by the beginning of 2021

Canopy spent $550 million on property, operations and buying other companies last quarter. At this burn rate they have six quarters of cash remaining.

The chart below excludes cash spent on acquisitions giving Canopy two years of cash if management eases up on their recent buying spree. 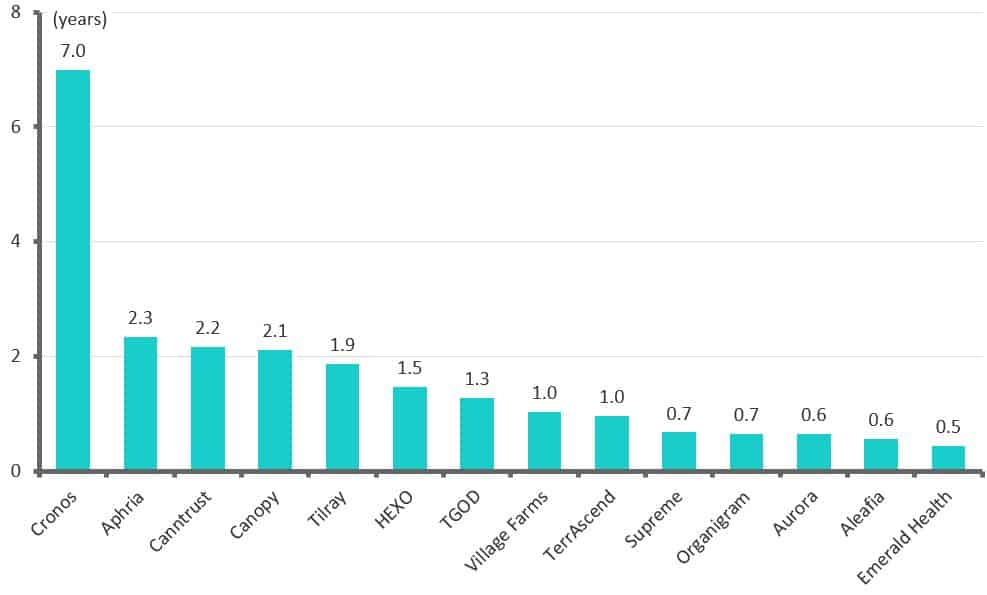