Investors will probably like this earnings release from Canopy Growth (TSE: WEED; NYSE: CGC). Net revenue of $83 million met or exceeded most analysts forecast in the $75-$85 million range.

The company also handily beat earnings estimates, posting a gain of $0.22/sh vs estimates of a $0.17/sh loss, even though the gain was all a result of a huge $235 million positive change in the value of some liabilities.

Removing this transitory, non-cash gain, the company had an operating loss of almost $90 million or $8.60 per gram sold.

Investors should be aware that if Canopy continues on their current acquisition spree they will be out of money by December 2019.

For any investor with a time horizon longer than a few weeks, you need to understand the bet you are making when you own Canopy Growth.

This is a company with big aspirations and management has built a cost structure to match.

Canopy will have to sell 70,000 kg a quarter before they turn a profit.

That is up 7x from this quarter’s production of 10,000 kg and would represent a 30% market share of the entire Canadian market before Canopy sees a dime of profit.

Can they do it?

Only time will tell and Canopy does have the luxury of time with a war chest worth C$4.9 billion, enough for four years of normal operations at the current burn rate.

Investors should be aware, however, that if Canopy continues on their current acquisition spree they will be out of money by December 2019.

Canopy is a cannabis growing rocket ship carrying the hopes and dreams of the entire industry on its back, but with its massive cost structure, it has to be.

This is a company with massive potential, but also massive expectations.

Revenue was a bright spot in the quarter down only 17% to $8.20/gram, still the highest in the industry, driven by strong oil and gel cap sales and high margin flower sales to Germany.

Revenue Per Gram in the Last Two Quarters 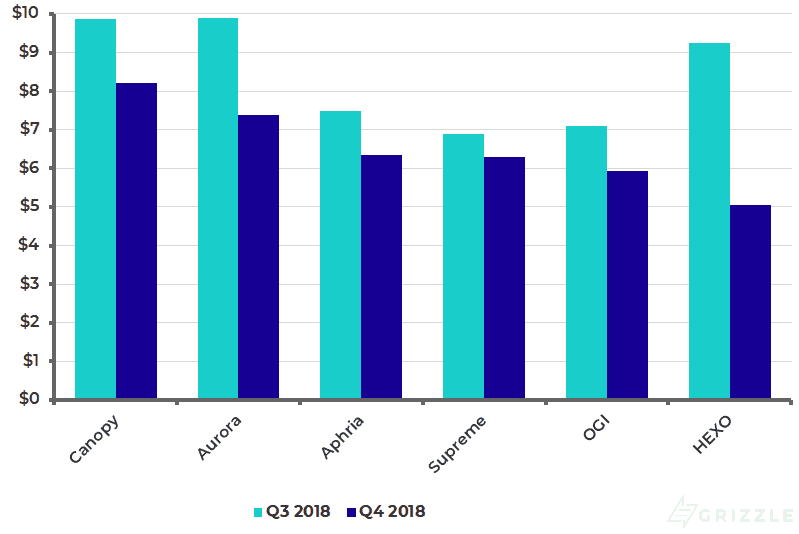 Canopy finally saw declining production costs in the quarter, though they still remain the least efficient LP in cannabis with production costs of $6.40/gram compared to an industry average under $4.

They did manage to bring costs down 15% from last quarter which is better than Aurora Cannabis whose costs actually increased this quarter even though production tripled.

None of the big LPs are seeing any scaling benefits yet and the story of the day is about one growing pain after another. 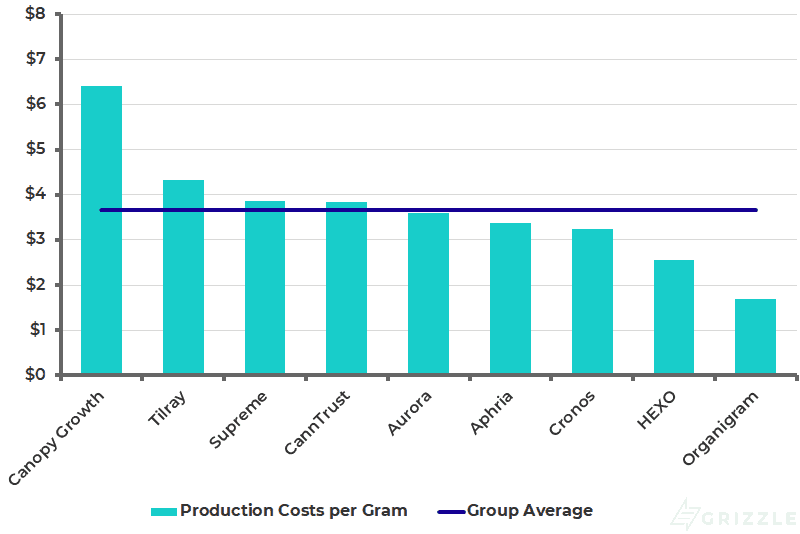 Canopy’s gross margin was up almost 3x from higher sales, but on a per gram basis gross margins were down 20% and remain the lowest in the industry at $1.80/gram.

Canopy did call out $13 million of costs related to non-operating subsidiaries and spending on edibles infrastructure that is not yet generating any revenue.

Excluding these costs, gross margins would be $3/gram, only 10% below the group average. 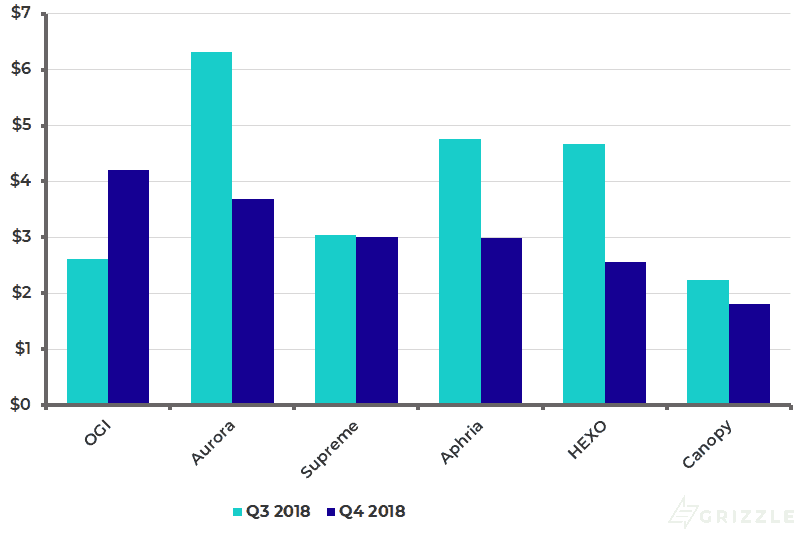 We track EBITDA for the three largest producers to see if they are turning the corner towards profitability.

Canopy continued to generate negative EBITDA and the deficit grew again this quarter to $100 million, an industry high.

Canopy loses $13 in EBITDA on every gram they sell at the moment.

Investors really need to see this EBITDA deficit shrink for the three largest LPs in the next two quarters or else stock prices are going to take a hit. 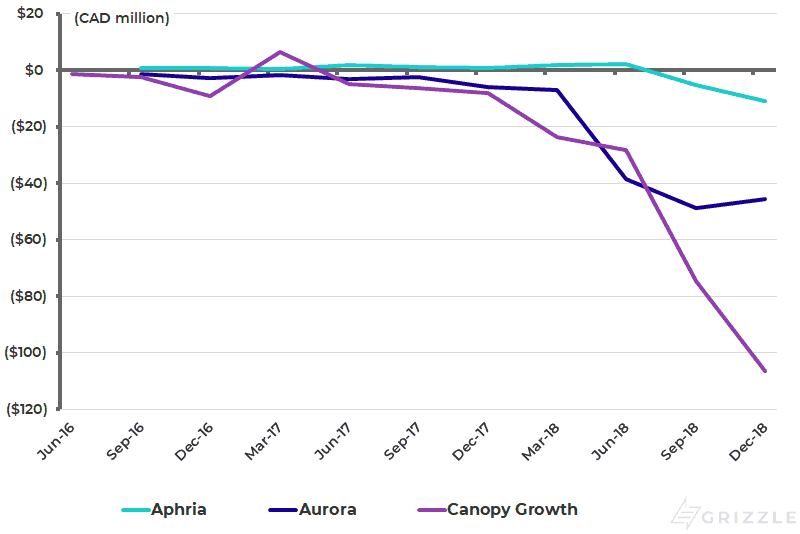 Canopy has such a high EBITDA burn rate largely because of a big headcount and the salaries and payments that go with it. 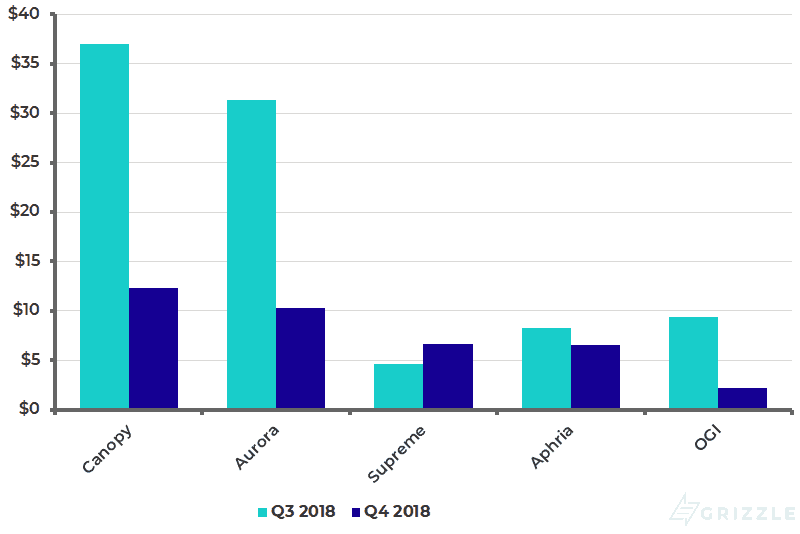 Looking at EBITDA for the rest of LPs who have reported so far, only Organigram is generating any cash flow with three months of recreational sales on the books.

It will take a few more quarters of recreational sales before we see who the real margin leaders and laggards are. 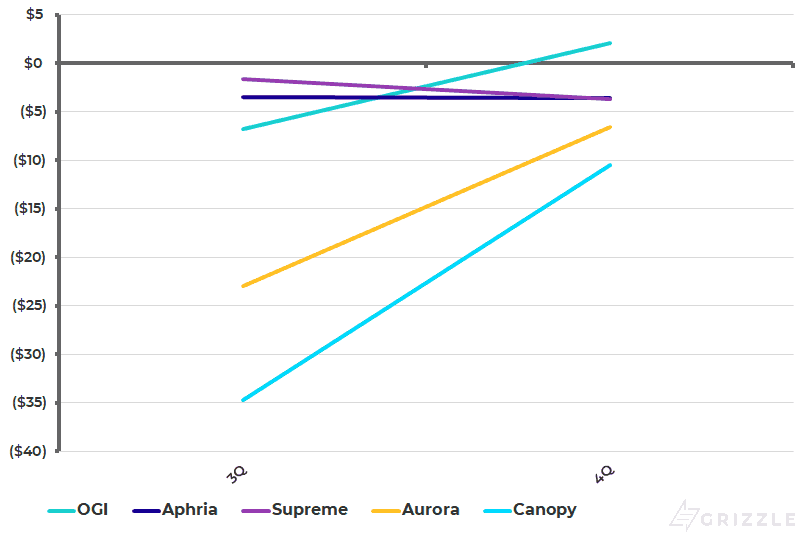 Growing Issues Will be Front and Centre on the Call

Canopy harvested 7,600 kg, which was down 50% from the quarter before and lower than sales of 10,000 kg, a first among public growers.

One concerning data point from earnings was grams harvested.

Canopy harvested 7,600 kg, which was down 50% from the quarter before and lower than sales of 10,000 kg, a first among public growers.

Analysts will no doubt probe management to find out what growing issues led to such a huge decrease in harvested volumes.

At the end of September, Canopy held 31,214 kg of inventory so even with an expected net decrease in inventory of 3,000 kg this quarter they still have ~34,000 kg available to meet market demand next quarter.

This doesn’t excuse the fact that Canopy looks to be having more problems growing cannabis in large quantities than peers.

The main problem facing investors is they own a stock already pricing in good times ahead.

Investors are looking for hundreds of millions in EBITDA in 2020, a dominant market share in Canada and attractive product pricing.

Canopy is delivering on the pricing and market share so far, but EBITDA is quickly going in the wrong direction.

In the early months of legalization, where expectations are high and operational hiccups are inevitable we would recommend investors rotate into lower multiple names with less downside like Aphria, Organigram, CannTrust, and Supreme until Canopy management proves to investors they can generate a profit.