Overtly anti-Communist Party demonstrations took place in Hong Kong on the same day (October 1) that Beijing celebrated the 70th anniversary of the PRC taking power in 1949. Yet, despite this, it looks increasingly like China is determined not to get directly involved in Hong Kong since it views the protests as a trap to goad Beijing into direct intervention, which would then trigger massive media coverage globally and a resulting surge in anti-China sentiment and, most likely, sanctions from Washington.

This is the explanation for the change in spin from the mainland media in recent weeks. This has switched from the previous negative coverage of the demonstrators, as “separatists” who deny their Chinese identity, to emphasizing the alleged economic motivation behind the demonstrations including, most importantly, the cost of Hong Kong housing. Hong Kong residential property is certainly incredibly expensive. The home price to median annual household income ratio has risen from 6x in 2002 to 19x at present (see following chart). 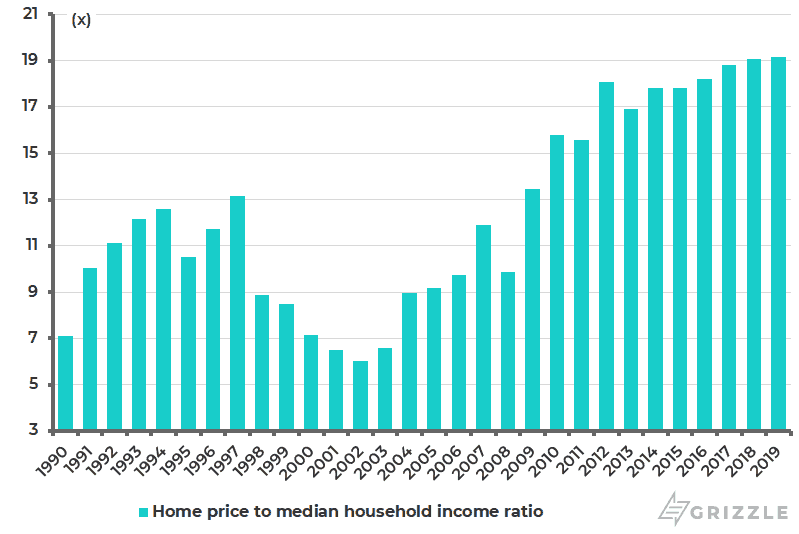 The Impact of Land Hoarding on the Housing Market

The result has been overt criticism in the mainland media of the Hong Kong property developers for hoarding land with particular focus on the estimated 100m sq. ft. of farmland owned by Hong Kong’s biggest private developers purchased many years ago at dirt cheap prices. Reading some of the mainland media, it is almost like China is recommending that the Hong Kong Government should compulsory purchase the land at fire sale prices.

Meanwhile, Hong Kong’s largest pro-Beijing political party, the Democratic Alliance for the Betterment and Progress of Hong Kong (DAB), has formally proposed that the government should use the Lands Resumption Ordinance. This allows the government to take back private land for an established public purpose, such as public housing. But this has to be done at market prices and is subject to judicial appeal. This does not seem to be what the mainland media has in mind since, if the government follows the current legal procedure, buying the farmland from the developers will cost a lot of money.

To be sure, Beijing could instruct the Hong Kong Government to follow the historical precedent of Singapore, which passed a Land Acquisition Act in 1966. This is the reason why the Singapore Government now owns so much land. While compensation began at market prices, the Singapore Government in 1973 fixed compulsory purchases at then prevailing prices for the next 20 years and more. But Singapore, under its founder Lee Kuan Yew and his People’s Action Party, never signed up to the free market agenda.

Such a law introduced in Hong Kong at Beijing’s dictate would definitely constitute messing around with Hong Kong’s legal system, just as in the same way the now abandoned attempt to amend the extradition bill was viewed. On this point, the Basic Law states that: “The Hong Kong Special Administrative Region shall, in accordance with law, protect the right of individuals and legal persons to the acquisition, use, disposal and inheritance of property and their right to compensation for lawful deprivation of their property. Such compensation shall correspond to the real value of the property concerned at the time and shall be freely convertible and paid without undue delay.”

Is the Housing Issue Really the Cause of the Protests?

Still, if this is the case, is it really true that the housing issue is the real driver behind the protests? This may be part of the reason. But another is the lack of real wage growth over the past ten years where a contributing factor has been the growing number of mainlanders living in Hong Kong. The Hong Kong real wage index is up by only an annualized 0.7% over the past ten years (see following chart). Meanwhile, the cumulative number of mainland migrants entering Hong Kong via the so-called one-way permits scheme since the 1997 handover has risen from 572,808 at the end of 2008 to 1.05 million in mid-2019. Under the scheme a daily quota of 150 mainland immigrants are allowed to move to Hong Kong. Meanwhile, the Hong Kong housing affordability issue is rather more complicated than the narrow focus on the need to convert farmland applies. First, the local property market has been massively distorted by ten years of anti-speculation measures. These include stamp duties as high as 30% for nonresidents and a maximum loan-to-value ratio of only 30-60% for mortgages. It is also the case that, out of 1.2m owner-occupied homes, 65.7% or 799,029 have no mortgage at all. This, and the lack of supply, explains the ongoing upward rise in prices and the lack of negative impact from the recent Fed tightening cycle in the US-dollar-pegged Hong Kong economy.

Public rental housing mispricing causes more people to want to be in public housing, which in turn naturally restricts the incentives to build more supply in the private sector.

It is also the case that 29% of Hong Kong’s total housing stock is in public rental housing and tenants in these properties enjoy such cheap housing that they have no incentive to leave. For example, the average public housing rent is only HK$2,070 (US$264) a month, with some 810,600 households paying such a tiny amount. Meanwhile, the means test to determine whether a public housing tenant should be evicted from a property is generous in the extreme. Thus, it is possible for households of three persons to earn HK$115,000 (US$14,670) a month and still qualify to stay in their existing public rental housing, though they are required to pay double the rent. It is also possible for a household of three persons to have HK$2.3 million (US$293,400) in assets and still qualify for staying in public housing.

The result of such mispricing is that people want to be in public housing. This in turn naturally restricts the incentives to build more supply in the private sector. Meanwhile, the government has its own incentive for maintaining high property prices since 20% of the Hong Kong Government’s revenue comes from land sales (see following chart). Thus, the Hong Kong Government is forecasting land revenue of HK$134 billion (US$17 billion) a year over the next five years. 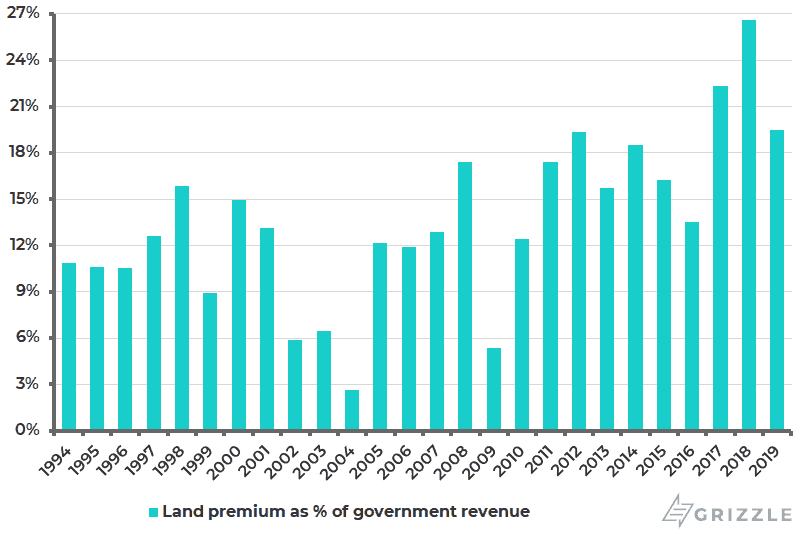 If this is the status quo, there would clearly be a massive impact on asset values and household balance sheets if Beijing instructed the Hong Kong Government to introduce Singapore-style legislation in the local legislature. Still, I doubt there will be such a draconian outcome. So long as China runs a closed capital account, Beijing needs Hong Kong to perform its traditional role as a link with the outside world. And status quo in Hong Kong requires financial stability. But in the near term it is understandable why the mainland media has switched the focus from “separatist” protestors to evil property developers.

Meanwhile, the risk the PRC runs by its “kid glove” treatment of the Hong Kong protestors is that it looks weak in the eyes of its own population, who remain almost universally against the protestors. But that is clearly seen as a lesser evil than the global backlash which would follow moving the PLA into Hong Kong, even if that option is allowed under Hong Kong’s Basic Law.