How the Fed is Overshooting its Inflation Target

Two speeches made on Feb. 22 by the leading academic economists at the Fed have clearly provided the theoretical justification for a return to further exercises in unorthodox monetary policy. Remember that Powell, a lawyer by training, has no background in theoretical monetary economics.

The two speeches were by Federal Reserve Vice Chairman Richard Clarida and New York Fed President John Williams at the U.S. Monetary Policy Forum in New York. The main purpose of Clarida’s speech was to set the framework for the Fed’s proposed coming strategic review, which is meant to commence this year with its conclusion due to be announced in the first half of 2020.

The main purpose of this review was hinted at in Williams’ speech. That is whether the Fed risks losing credibility, in terms of the difficulty it has had meeting its 2% inflation target in this cycle despite more than nine years of economic growth and a seemingly tight labour market. Williams stated that “persistent undershoot of the Fed’s target risks undermining the 2% inflation anchor.” Williams went on to mention a worrying deterioration in longer-run inflation expectations since the financial crisis ten years ago.

The practical consequence of such views is likely to lead to a Fed more willing to countenance an overshooting of its 2% inflation target in coming years in an effort to help “anchor” long-term inflation expectations at around 2%, to use the jargon employed by the monetary quacks.

Clarida also mentioned that the Fed review would look at other policies employed elsewhere such as the Bank of Japan’s yield curve control and, potentially by implication, even negative interest rates. To be precise, he said: “For example, as is presently Bank of Japan policy, the FOMC could… establish a temporary ceiling for Treasury yields at longer maturities by standing ready to purchase them at a preannounced floor price.”

He went on to say that, during the crisis and its aftermath, the Federal Reserve reviewed, but ultimately found, this tool and some others deployed by foreign central banks “wanting” relative to the alternatives it did pursue. But the review this year will reassess the case for these and other tools in light of more recent experience in other countries.

A similar dovish message was conveyed in the Fed’s semi-annual Monetary Policy Report to Congress which was also released on Feb. 22. The report confirmed what has already become evident. That is that the Fed is no longer pretending that it will reduce its balance sheet to pre-financial crisis levels as discussed here previously (see “Fed comes to grips with reality: Asset prices drive economies“, Feb. 11, 2019). The ostensible stated rationale for this is that commercial banks’ higher demand for reserves reflects an increased focus on liquidity risk management as a result of tougher regulation post financial crisis.

If the above represents a re-assertion of dovish orthodoxy at the Fed, it is certainly true that inflation in America has continued to surprise the consensus on the downside despite all the talk of tight labour markets. The headline personal consumption expenditure (PCE) deflator rose by only 1.7%YoY in December, less than the Fed’s 2% inflation target. While on a year-on-year basis, core PCE inflation has only been marginally above the Fed’s target for one month since April 2012. Thus, core PCE inflation rose to 2.04%YoY in July but was 1.94%YoY in December (see following chart). As for the labour market, Powell said on 26 February during a Senate Banking Committee hearing that the labour market may still be able to create more jobs without inflation coming into play. 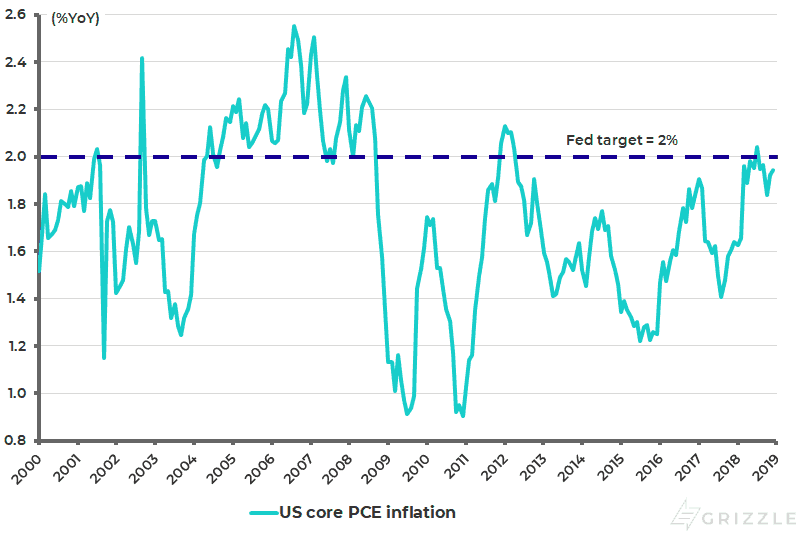 It is this sort of data that is causing the doves at the Fed to re-assert their case with a seeming lack of push back. It is also re-initiating the debate, formerly encouraged by former Fed chairman Ben “Billyboy” Bernanke, about what other unorthodox monetary policy options are available the next time the U.S. economy turns down and the Fed must deal with the “zero bound”.

The introduction of negative interest rates in Japan in February 2016 led to a decline in inflation expectations, the precise opposite of what was intended.

Yet what is lost in this debate is any fundamental questioning about whether these unorthodox monetary policies are effective. Indeed, in this writer’s longstanding view, they are positively counterproductive, with the negative rate episode in Japan the obvious example.

Remember the introduction of negative interest rates in Japan in February 2016 led to a decline in inflation expectations, the precise opposite of what was intended. Japanese consumers’ inflation expectations declined from 2.3% in January 2016 to a low of 1.6% in March 2017 (see following chart). While core-core CPI inflation, excluding fresh food and energy, fell from 1.3% YoY in November 2015 to a negative 0.1% YoY in March 2017 and was still only 0.4% YoY in January (see following chart). 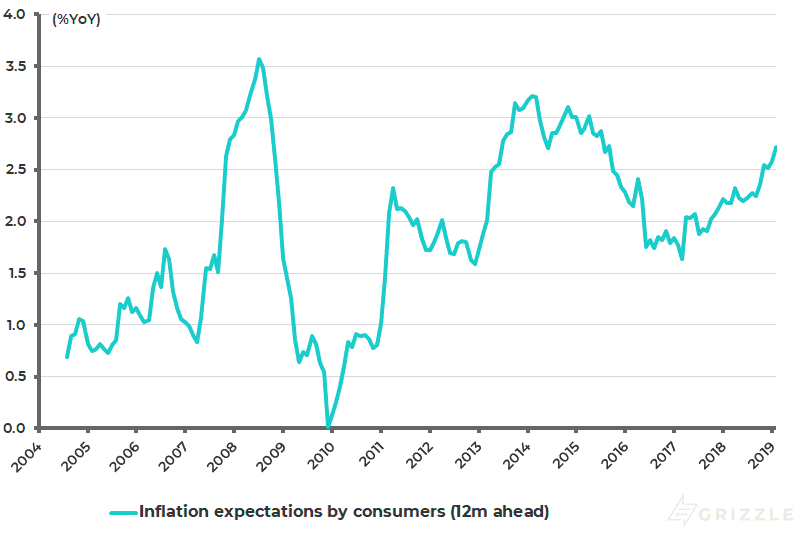 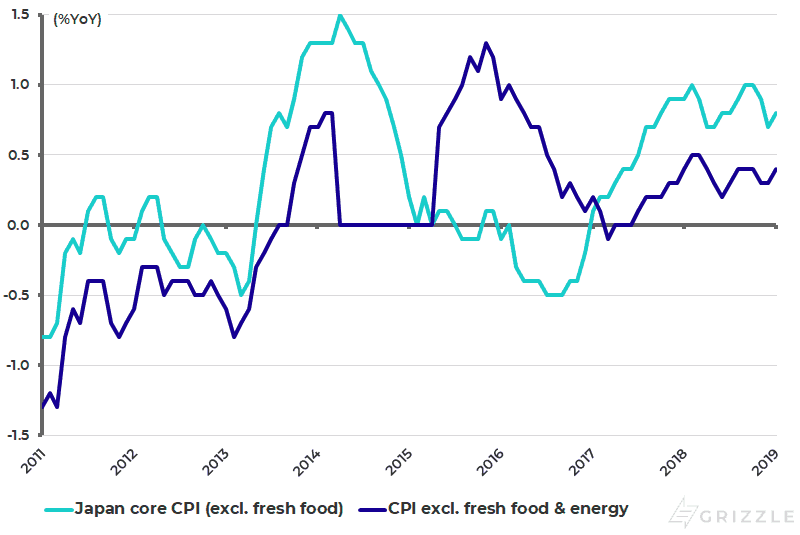 The reality is, of course, that the deflationary trend is due primarily to high debt levels and the related factor of declining velocity; though “real world” factors such as demographics and technology have also played a significant role. But regardless of what I think, the reality is that the monetary quacks remain in control of the central banks and markets continue to respond positively to their dovish signals.

The result is that U.S. monetary tightening increasingly looks “done” while it now seems, based on the noises coming out of the Fed, that balance sheet contraction will stop at around US$3.5 trillion if not higher. On this point, Powell also said on Feb. 27 in his Congressional testimony that the Fed is close to announcing a plan to end the balance sheet “runoff”.

The balance sheet is currently US$3.97 trillion. Still, the Fed’s balance sheet is a lot lower as a percentage of GDP than at the other major G7 central banks. The Fed’s balance sheet is now running at “only” 19% of GDP, compared with 102% for the Bank of Japan, 40% for the ECB and 29% for the Bank of England (see following chart). And interest rates remain much lower in all these jurisdictions. This is why there is huge scope for short-term rates to fall back towards zero in America the next time the economy turns down. Indeed this is how the yield curve will steepen if and when the American economy next enters recession. Meanwhile, it is worth noting the continuing declining trend in U.S. housing starts, which fell by 14.3%YoY in December and were down 7.8%YoY in January (see following chart). 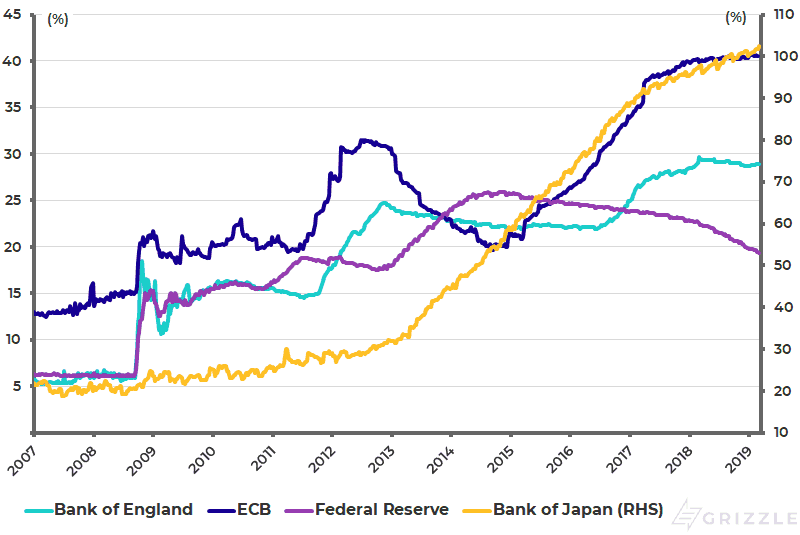 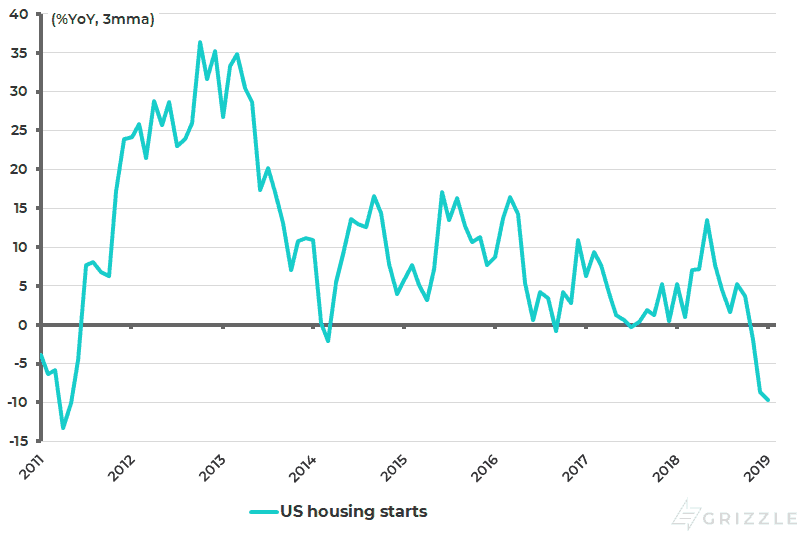