Hong Kong Protests Come at a Difficult Time for China

Amid the continuing U.S.-China trade row, and the potentially even far more negative longer-term consequences of the targeting of Huawei and the related “tech war”, it had been easy to ignore the other potentially damaging issue relating to China until the recent mass demonstrations.

The controversy over a new extradition bill or at least the proposed amendments to the existing extradition law, is the big news story in Hong Kong in recent weeks. The issue is so controversial because it has raised the risk that people can be legally extradited to mainland China for politically connected crimes. This threatens the core of the “one country two systems” principle, and Hong Kong’s related British-based legal system, which are the key features of what makes Hong Kong a uniquely effective place to carry out business.

It is, therefore, a much more critical issue than the demonstrations in Hong Kong triggered by “democracy” activists in 2014. These did not have mainstream support because ordinary Hong Kong people are not too obsessed about “democracy” in the technical sense of universal suffrage, most particularly as it raises from a Beijing perspective the politically explosive issue of independence.

Messing around with the legal system is quite another matter, however. Under the Sino-British agreement on Hong Kong signed in 1984, the formula of “one country two systems” is meant to last 50 years after Hong Kong was returned by Britain to China sovereignty in 1997.

Threatening the Rule of Law

The row over the extradition bill, proposed by Hong Kong Chief Executive Carrie Lam, initially caused Beijing to lash out at both local and foreign critics who had warned that “the rule of law” is under threat. Thus Wang Zhimin, director of Beijing’s liaison office in the city, was quoted as saying in May that if China could not put its own citizens on trial within its own borders, it would be tantamount to granting Hong Kong extraterritoriality (see South China Morning Post article “Extradition bill critics savaged by liaison office”, May 18, 2019).

Since then Beijing’s tone has changed as the controversy over the extradition bill has now got the attention of the mainstream media with more than 1 million Hongkong people (according to the organizer) marching in protest on June 9, and an estimated 2 million in another march on June 16. As a result, the extradition bill has now been put on hold if not yet cancelled, which is what the demonstrators want. The timing has certainly not been good from China’s standpoint given the ongoing U.S.-China trade dispute and the fact that Donald Trump and Xi Jinping are due to meet on June 28-29 at the G20 Summit in Osaka.

Hong Kong has traditionally always been about violent swings in greed and fear.

The base case now is that the bill will be quietly shelved, if not formally abandoned. But if the mood does turn more confrontational and violent, it is useful to remember that Hong Kong has a longstanding propensity to panic. Indeed, Hong Kong has traditionally always been about violent swings in greed and fear. I remember the panic in 1983 triggered by the question of what would happen in Hong Kong after the end of British colonial rule in 1997.

The concerns about Hong Kong’s future culminated in a speculative attack on the Hong Kong dollar leading to the establishment of the currency board and the U.S. dollar peg in October 1983, which still exists today at the same exchange rate of HK$7.8/US$1 (see following chart). The peg survived the next panic when the Hong Kong dollar came under speculative attack in the Asian Crisis in 1997 though residential property prices ended up declining by 56% between October 1997 and October 1998 as asset prices corrected instead of the currency (see following chart). 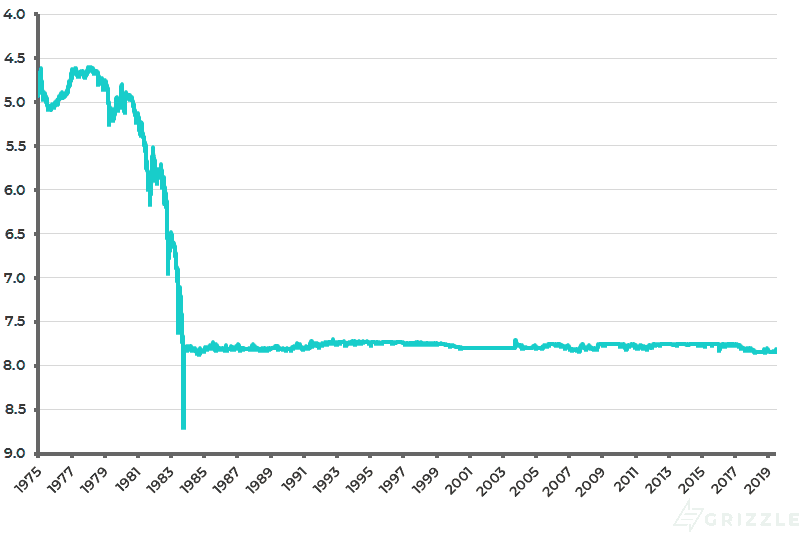 The lesson to be learnt from such episodes is that it has always made sense to invest into such panics in Hong Kong. I would also bet that the peg will hold again in the next panic, though the workings of the currency board mean that Hong Kong short-term interest rates can rise dramatically before conditions stabilize. In 1997 the three-month Hibor peaked at 37%. It is now 2.41% (see following chart). 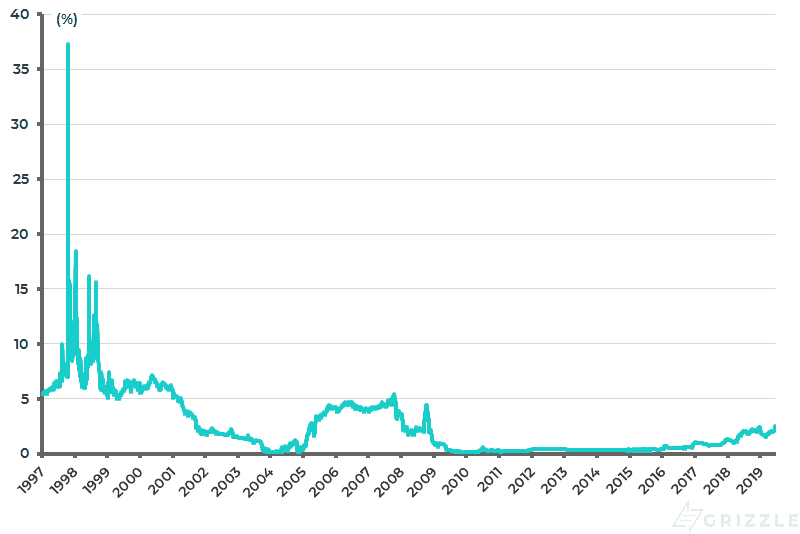 Meanwhile, returning to the subject of deteriorating U.S.-China relations, it was interesting to read recently an op-ed in the Wall Street Journal by Republican Senator Marco Rubio outlining a new bill he has introduced that will force Chinese companies listed on U.S. exchanges to be subject to U.S. listing rules and related regulatory oversight (see The Wall Street Journal article: “You can’t trust a Chinese audit”, June 5, 2019). This could be a real issue for the 156 Chinese companies which the article notes are currently listed on America’s three largest exchanges with a combined market capitalization of around US$1.2 trillion, since Beijing currently restricts access to relevant accounting information.

In this respect, it is also interesting to read news reports in mid-June that U.S.-listed Alibaba is now planning a US$20 billion share sale in Hong Kong, which would be the biggest equity raising in the territory since 2010.