The view this year is that financial markets this year will be more sensitive to developments concerning the Fed balance sheet, or quantitative tightening, than interest rate hikes. This is why stock markets have reacted positively to Jerome Powell’s comment in the post-FOMC meeting press conference on Jan. 30 that “the normalization of the size of the portfolio will be completed sooner, and with a larger balance sheet, than in previous estimates”.

This full-scale retreat from the previously signalled “autopilot” US$50 billion monthly contraction in the Fed balance sheet was signalled by a Wall Street Journal article on Jan. 25 that reported that Fed officials are close to deciding that they will maintain a larger portfolio of Treasury securities than they had expected when they began shrinking those holdings two years ago, bringing forward an end to the Fed’s balance sheet contraction (see The Wall Street Journal article: “Fed officials weigh earlier-than-expected end to bond portfolio runoff”, Jan. 25, 2019).

Until now, the official line of the Fed on balance sheet contraction had been articulated by Simon Potter, an executive vice president of the Federal Reserve Bank of New York, in a speech delivered in Paris in late October (“US Monetary Policy Normalization is Proceeding Smoothly”, Oct. 26, 2018).

Commercial banks still have US$1.48 trillion of excess reserves sitting at the Fed.

In his remarks, he posed the question of when the shrinkage of banks’ reserves held at the Fed, as a consequence of the contraction of the Fed’s portfolio of securities, would go from an environment characterized by abundant reserves to one characterized by scarce reserves. Commercial banks still have US$1.48 trillion of excess reserves sitting at the Fed (see following chart).

He answered his own rhetorical question by saying he would expect to see a pickup in the above-IOR (interest paid on reserves) unsecured overnight lending in the interbank market. He went on to conclude that he did not believe the “steep” portion of the demand curve had been reached, where aggregate reserves are scarce. The interest rate on reserve balance is now 2.4%, the same as the effective federal funds rate. 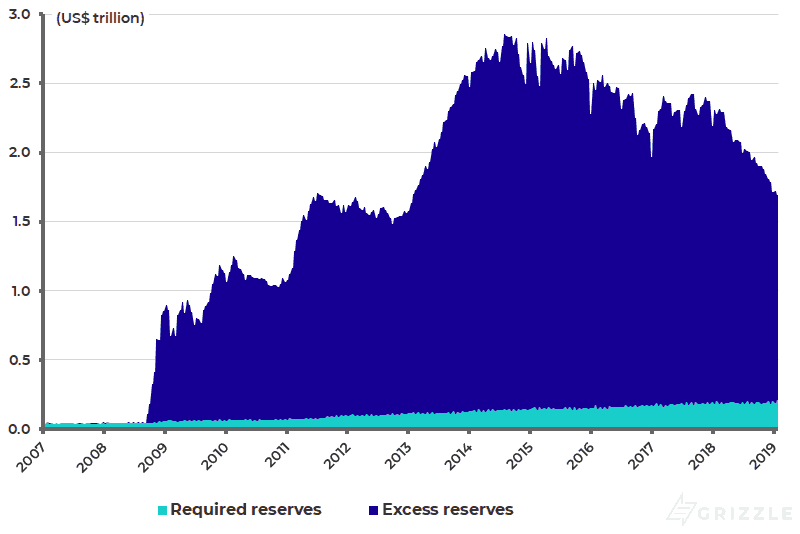 In the post-QE world asset prices now drive economies and not the other way round.

If this was the conclusion last October, the Fed seems to have changed its mind given another of Powell’s comments at his most recent press conference, namely that the “current estimates of reserve demand are considerably higher than estimates of a year or so ago.” This has pleased the stock market because most market participants have concluded that the rise in asset prices associated with nine years of Fed quanto easing was not a coincidence and that an ongoing balance sheet contraction raises the risk of asset price declines, most particularly as this is what happened last year when virtually every world stock market declined. Meanwhile, the view here remains that in the post-QE world asset prices now drive economies and not the other way round.

Powell has also given himself and his colleagues time to come to a definitive conclusion on the end of balance sheet contraction, saying “we will be finalizing these plans at coming meetings”. A cynic will assume that that discussion will be influenced as much by intervening stock market action as technical questions of the U.S. banks’ demand for excess reserves. The previously mentioned Wall Street Journal article quoted market estimates that the balance sheet would stop shrinking at US$3.5 trillion, compared with US$4.03 trillion now (see following chart). Remember that it peaked at US$4.52 trillion in January 2015. 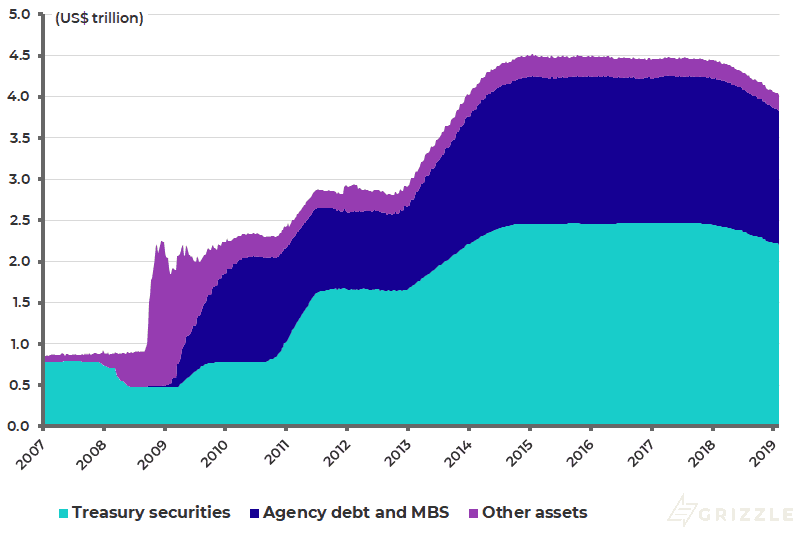 Europe’s Not Rushing to Contract Their Balance Sheet

Another source of potential relief for investors, if not for European banks, is that the ECB is no longer in any rush to start balance sheet contraction in the Eurozone with ECB Governor Mario Draghi’s acknowledgement at his latest press conference on Jan. 24 that “the risks surrounding the euro area growth outlook have moved to the downside”.

If the weakening Eurozone data has forced Draghi to back off the normalization narrative, he will still be hoping that he can avoid resuming balance sheet expansion before he steps down at the end of October. After all, the ECB only stopped expanding its balance sheet at the end of last year at which point it totalled €4.7 trillion. It will stay at this level since it is re-investing maturing bonds. The official ECB main refinancing operations rate and deposit facility rate are still 0.00% and a negative 0.4% respectively, while German government bond yields are still negative up to nine years on the yield curve (see following chart). 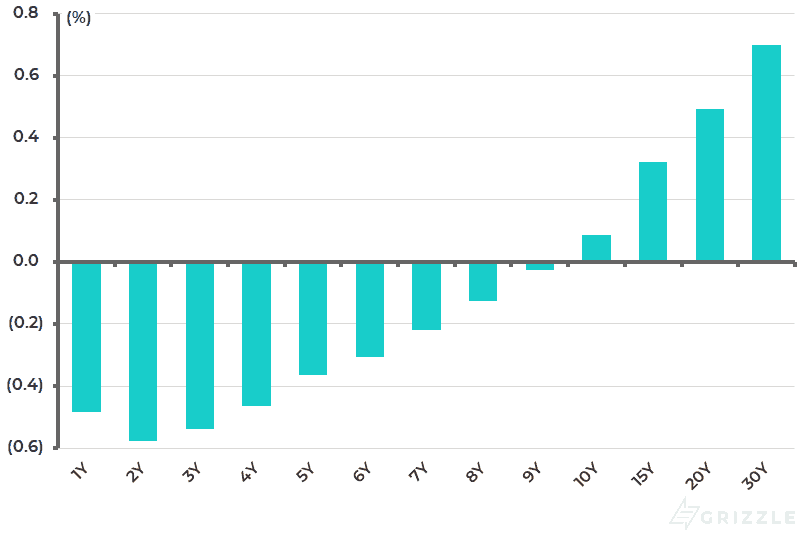 What this means for Eurozone banks is clear from the chart below which could be referred to as the “Japanification” of European banks (see following chart) since it is very hard for banks to make money with negative or near negative rates. Meanwhile, it should not be forgotten, as hopes of monetary normalization recede in the Eurozone, that Germany’s biggest bank still had a balance sheet equivalent to 40% of German GDP as at the end of 2018.