MedMen Confirms Rumours, In the Middle of a “Non-Bankruptcy”

The rumours that originated on Twitter and were first reported by Grizzle have now been confirmed by the company’s CEO Adam Bierman.

Bierman, in an online interview, confirmed the company is having trouble paying suppliers and enlisted a turnaround firm to handle negotiations.

When a company isn’t even able to pay its suppliers you know there is a cash crunch going on.

Grizzle has warned investors for months that unless MedMen (CSE: MMEN) begins generating positive cashflow, the stock value of the company will continue to fall off a cliff on its way to a total wipeout.

What is totally unique about the current situation is that MedMen doesn’t have the benefit of the federal bankruptcy process to wipe away debts and start fresh.

Management is asking suppliers to accept pennies on the dollar but if the suppliers don’t accept and MedMen stays in business the company will eventually have to pay these same suppliers all the money they are owed.

In a typical Chapter 11 bankruptcy MedMen could say to suppliers “Either you accept 50 cents on the dollar for what we owe you, or we file for bankruptcy and you get even less or potentially nothing at all”.

In the current situation, MedMen has no way to wipe away supplier IOUs unless the supplier agrees to a discounted payout.

Management is telling suppliers they are about to run out of money while at the same time telling investors that the cash position is healthy, so which is it?

At the end of the day whether this is a bankruptcy or “non-bankruptcy,” the results for owners of MedMen stock will be the same.

MedMen is about to issue a ton of new shares, whether it’s to restructure lenders, pay off suppliers or to bring in cash from new shareholders.

If MedMen ends up paying off the $54 million of receivables with shares, currently valued at $0.48, the share count will increase by 21% effectively cutting the value of each share by 17%.

Current shareholders will be diluted down to almost nothing in the process.

This is effectively the same outcome as if current shareholders were wiped out in a traditional chapter 11 bankruptcy.

Stock Only Worth $0.08/sh Even with Recent Cash Infusion

The assets MedMen is selling in Illinois and Arizona still isn’t enough cash to pay for operations and the debt coming due later this year.

Regardless of what MedMen does to raise more cash, at the end of the day, management needs to turn the ship around and start generating positive cashflow.

This is the only way the company will eventually pay down all this debt and grow the asset value to the point where stockholders would not be totally wiped out in a true restructuring.

Even if they can stay in business shareholders now own a much slower growing entity.

To keep the lights on MedMen is selling some potential lucrative assets in Illinois and Arizona.

Yes, these assets are bringing $54 million in the door, but that still isn’t enough cash to pay for operations and the debt coming due later this year.

Not to mention by taking these growth opportunities out of the equation MedMen’s revenue and cashflow growth potential are now much less while they are still on the hook to pay back the same amount of debt.

The company is still on the hook to pay back a lot of debt, and now will be generating less cashflow with which to do it. A $77 million loan due in October could still cause problems and is likely to be restructured, increasing the share count and further diluting shareholders.

A Word of Advice if MedMen Owes you Money

Suppliers who are owed money by MedMen may think they have a difficult decision to make, but in reality there is one clear cut choice for how to proceed.

If MedMen is not at risk of being liquidated and sold off for parts, there is no way you should settle for anything less than 100 cents on the dollar for your outstanding bills.

Why would you accept less than you are owed if MedMen claims they are in a good cash position and will be paying future suppliers every cent they are owed.

Looking at the letter outlining the payment options offered, the best option by far is option 3.

Option # 1: Suppliers aren’t looking to bet on the future of MedMen through owning shares not to mention they needed the money yesterday anyway.

Option #2: Why would you wait until March to accept $0.50 on the dollar when you can wait another week or two to start being paid the entire amount you are owed.

Option #3: This is the option every supplier should take as long as MedMen isn’t being sold off for parts which doesn’t seem to be the case. 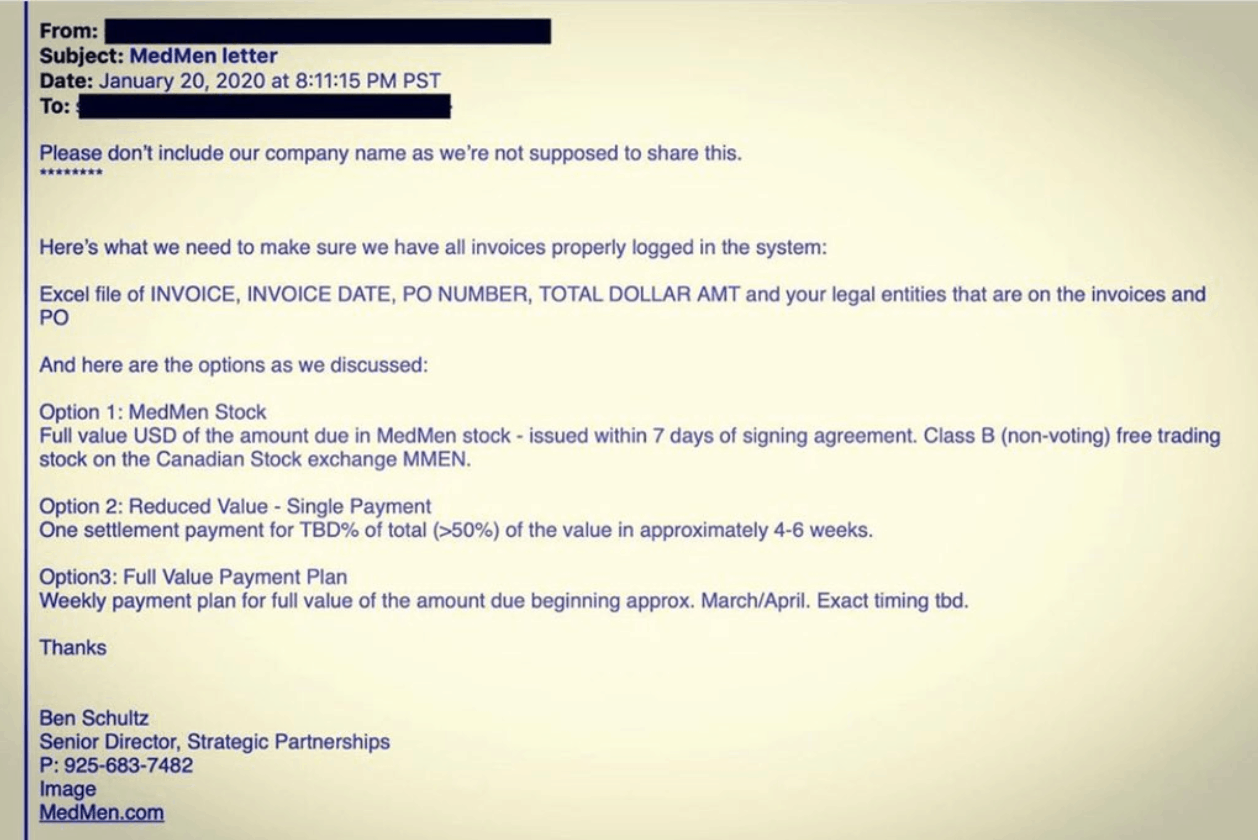