US Sanctions on Iran: The Unraveling of Pax Americana

Amid current news headlines about North Korea and related nuclear issues, it is important not to ignore the potential schism that could occur in the G7 world as a consequence of the practical fallout from Donald Trump’s decision on May 8 to exit the 2015 Iran nuclear deal.

What Will Happen to European Investments in Iran?

One practical issue is what is going to happen to European investments in Iran. The most high profile example is French energy company Total’s investment in a giant Iran gasfield. Total said this month it would pull out of Iran and its development of the giant South Pars gasfield unless it is specifically protected from US penalties and related sanctions (see Financial Times article “Total threat to pull out of Iran dents EU hopes of saving accord”, May 17, 2018).

Obviously, some form of compromise may be negotiated. But if Washington takes a hard line, such as claiming US jurisdiction as regards dollar transfers between two sovereign countries as was the case in 2014 with the US$9 billion fine levied on French bank BNP, then a confrontation is seemingly inevitable and, as a result, a growing questioning of the US hegemony implied by the US dollar paper standard, a concern which has long been shared by both China and Russia.

Questioning the US’ role as the “Economic Policeman of the Planet”

French finance minister Bruno Le Maire says it’s not acceptable for the US to be the “economic policeman of the planet”.

In this respect, the most interesting reaction to the Iran issue since Donald Trump made his announcement on May 8 was that of the French finance minister Bruno Le Maire when he said on May 9 that it was not acceptable for the US to be the “economic policeman of the planet”.

In this respect, France is the European country to watch since it has a history of being willing to stand up to Washington in the post-1945 world. That cannot really be said of Germany and certainly not of Britain.

Staying on the subject of Iran, US Secretary of State and former CIA boss Mike Pompeo made an ultra-aggressive speech on Monday threatening Iran with escalating sanctions. In his first major foreign policy address as Secretary of State, Pompeo stated:

Sanctions are going back in full effect and new ones are coming… This sting of sanctions will be painful if the regime does not change its course… These will indeed end up being the strongest sanctions in history when we are complete.

The above rhetoric hardly suggests a willingness to compromise with the European position. The significance of all of the above is that Europe and the US remain on a collision course.

The importance of Europe for Iran can be seen in the fact that Iran’s exports to Europe have surged almost ninefold since the end of sanctions in January 2016.

Thus, Iran’s exports to the EU have risen from US$1.3 billion in 2015 to US$11.4 billion in the 12 months to January, according to the IMF Direction of Trade Statistics (see following chart).

There is also of course the growing trade between Iran and China. Iran’s total trade with China rose by 18%YoY to US$27.5 billion in the 12 months to January (see following chart). All this makes Iran a good example of the increasingly multipolar world where American influence or interests appear to be fading. 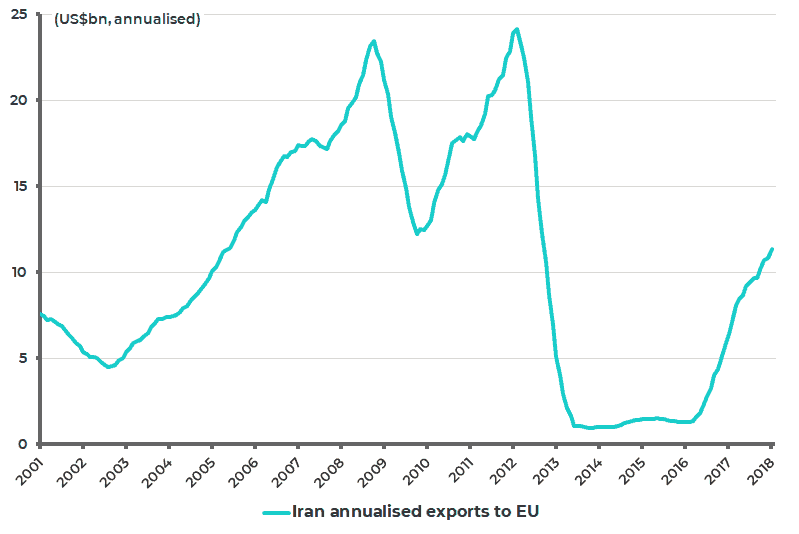 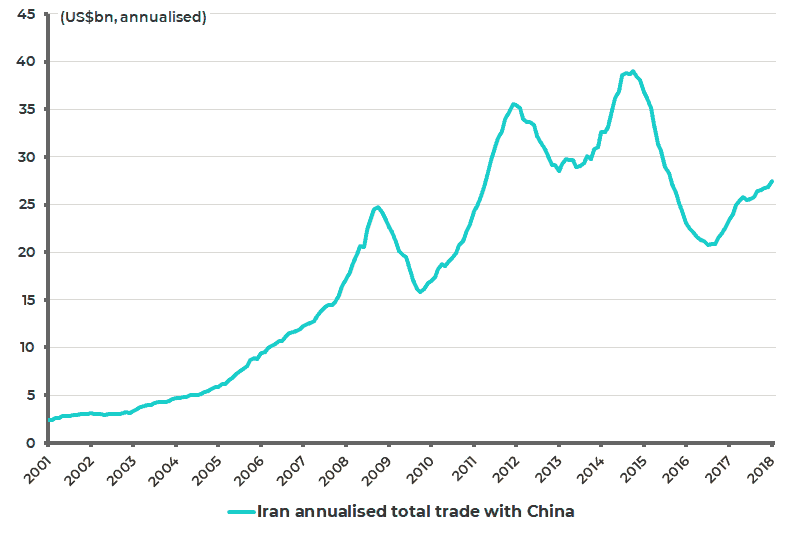 The rial has depreciated in the black market by 33% against the US dollar year-to-date.

Meanwhile, Iran’s currency has been hit hard in recent months as a result of the uncertainty created by Trump’s previous repeated earlier threats to pull out of the nuclear deal and now subsequent follow-through decision.

The rial has depreciated in the black market by 33% against the US dollar year-to-date (see following chart). This followed a period of comparative stability where the currency traded in a 13% range for two years, helped by the optimism created by the nuclear deal as well as by very high real interest rates. Iranian treasury bill yields peaked at 27% in early 2017 and bottomed at 16% late last year. They are now back at 19% as a result of the market pressure created by the threat of renewed American sanctions. 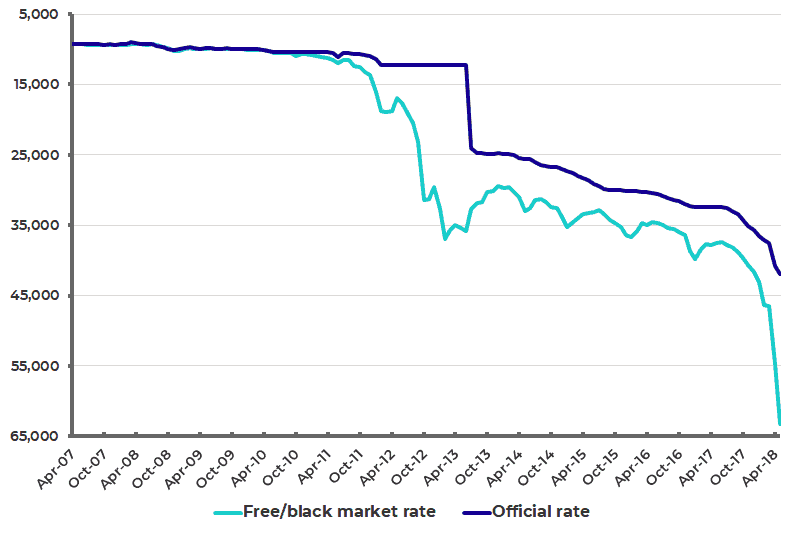 Note: Based on black market rate after Iran unified its dual exchange rates on 9 April. Source: Ministry of Economic Affairs and Finance, Bonbast.com

With a classic bullish emerging market demographic profile, in terms of a population of 80 million, 60% of whom are under the age of 35, Iran has, naturally, attracted a lot of foreign direct investment in recent years, most particularly following the 2015 nuclear deal.

The biggest of late was the previously mentioned Total’s US$4.8 billion investment signed in July 2017. But Total says it has only invested under €40 million so far, according to the above mentioned FT article, which is precisely why the French company wants to know if it can get a specific waiver from the sanctions.

In terms of the aggregate data, Iran’s actual FDI inflows surged by 64%YoY to US$3.37 biilion in 2016, according to United Nations data. While an Iranian government report published last year disclosed that Iran has approved US$11.8 billion in FDI during the 12 months to December 2016, with Spain and Germany accounting for US$3.2 billion and US$2.9 billion of that total respectively. 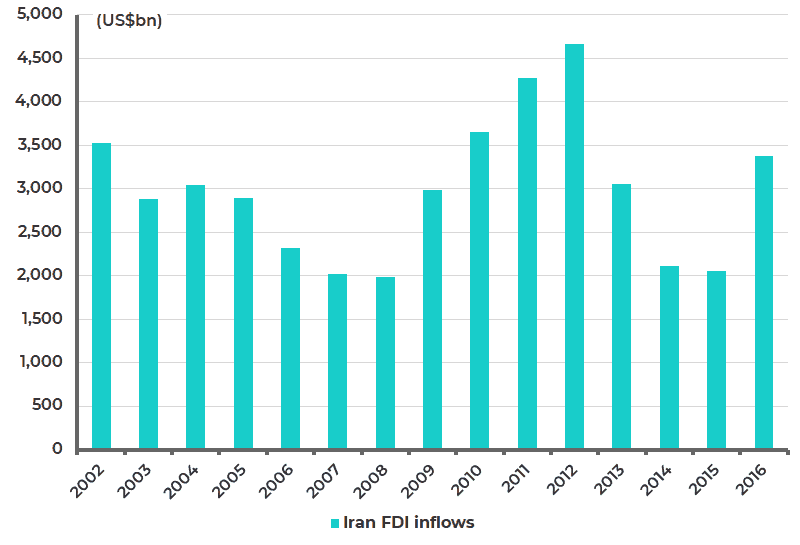 Will We See a Retreat from Pax Americana?

The point, therefore, remains that a confrontation between the US and the Eurozone on this issue is potentially a landmark development in the retreat from Pax Americana.

But for now it is probably the case that most of Europe, in the spirit of appeasement, will be content to fudge the issue in the hope that Donald Trump may not be re-elected to the US presidency for a second term and life will return to “normal”.

Turning away from geopolitical issues, Iran’s economy and financial markets spring some positive surprises. The country has an open capital account, while there is no tax on capital gains or dividends. The Tehran Stock Exchange celebrated its 50th anniversary last year.

But if FDI has been coming into the country in recent years, foreign portfolio investment activity has been much more limited, with estimates of only US$100 million invested in aggregate. This is the consequence in terms of equities of both a lack of inclusion in benchmark MSCI indices and, of course, of sanctions.

No Foreign Banks in Iran

There is still no foreign bank in Iran and therefore a lack of familiar custodians acceptable to international portfolio investors. Indeed, despite the 2015 nuclear deal, it is still not possible to use foreign credit cards to pay for hotel bills or any other transaction.

Foreign credit rating agencies are also absent which may not surprise given the three biggest are owned by the Americans. This is a pity for the Iranian Government given that, with minimal foreign currency debt and total government debt to GDP of only 35% of GDP, it would make a lot of sense to do a landmark sovereign bond issue. Total external debt is now only US$10.8 billion or just 2.5% of GDP, according to the Central Bank of Iran (see following chart).

Iran external debt as % of GDP 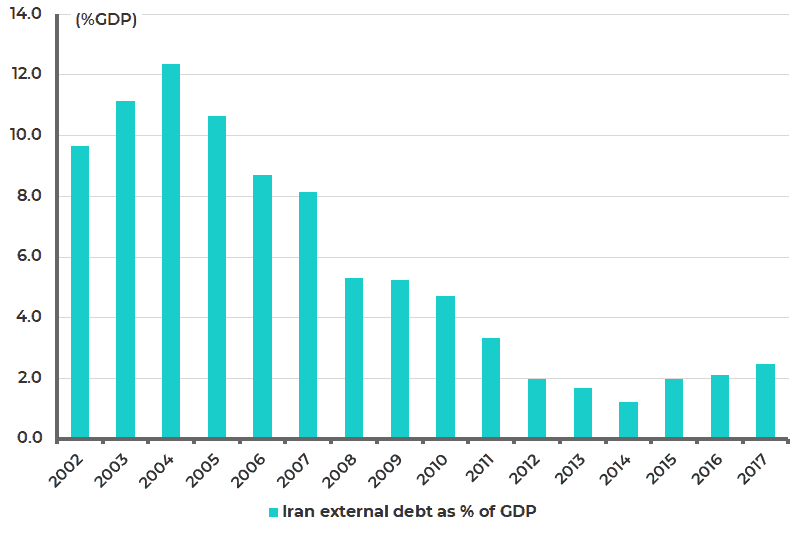