Weber vs Traeger: Who Makes the Best Grill and the Best Stock?

Weber and Traeger are not only selling grills anymore, they are also selling stock.

The two largest national grilling brands are now public and you have to decide if your favorite grill is also your favorite stock.

Grizzle is here to help with a comprehensive guide comparing these two companies.

Everything you need to know about the grilling market and the differences between Traeger (Ticker: COOK) and Weber (Ticker: WEBR).

The Grill Market is Having a Moment

COVID has caused an explosion in grilling, full stop.

This revenue chart from Weber makes it clear that grill sales have grown at unprecedented rates over the last 18 months.

COVID is keeping consumers at home and they’ve decided they want to grill!

But as an investor, this should make you nervous.

Both Weber and Traeger are going public at a time of record sales.

When growth starts to slow as pandemic buying fades, how will the market react?

Grill Sales Have Never Been Stronger

The Grill Market in Perspective

At the end of the day, Traeger and Weber sell steel grills.

Understanding the growth potential of the grill market as a whole will get you at least half of the way to making the right investment.

According to Weber and Traeger, 60% of households in North America own a grill.

That means there are 70 million grills, and 2 million of them are replaced for something new every single year. 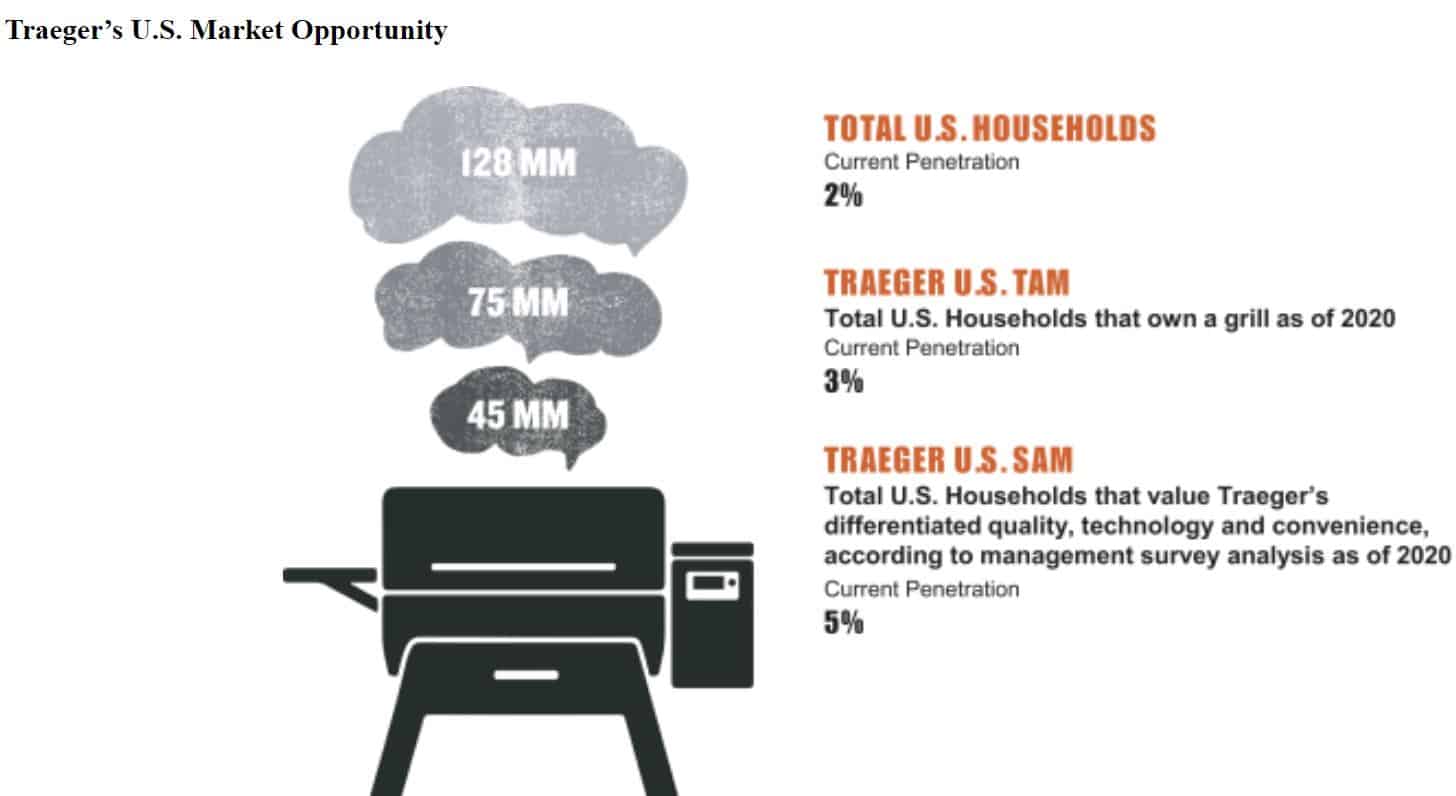 This means the grill market is growing around 3% a year.

So if either company is growing more than 3% you know they are taking market share away from someone else.

While the grill market is growing 20% a year due to a pandemic surge in buying, it will slow back down to 3.0%-4.5% over the next five years as the pandemic subsides.

Keep this in mind when you are thinking of investing in the grilling trend.

Traeger vs Weber – The Head to Head

Traeger has sold 400,000 grills a year over the last 5 years while Weber typically sells 4 million grills a year.

Weber is 10 times the size of Traeger.

However if we only look at the North American market Traeger is on pace to sell $810 million of grills this year while Weber sold $880 million in the US in 2020.

By 2022 these companies will likely be the same size in their home market, however Weber is an international company selling in Australia, Europe and Asia as well.

However if we only look at each company’s pellet grill options, Weber prices range from $800 to $1,000.

Treager is a premium product, but cooking area is too simple of a metric to use.

Traeger’s app which controls the grill seems to be far more user friendly and has more functionality judging by reviews.

The community is the major selling point of Traeger and why some investors argue it deserves to trade at a large price premium to Weber.

Similar to the community bull case for Peloton, if Traeger can build and maintain a vibrant grilling community, they ultimately will have to spend less money on advertising and will sell more grills and pellets per customer over time.

The Trager app is in the top 100 for food and drink on App Annie over the last 90 days, while the Weber iGrilling app and Weber app rarely break the top 200, even though Weber sells 10 times as many grills as Traeger.

So Traeger’s lead in social media awareness and usage is real.

Profitability is important because it tells us if either company has a special sauce that gives it an advantage over the other.

Here is where things are relatively simple.

Both Traeger and Weber make the same amount of money selling grills.

There are some differences in the specific costs each company has but we will cover those in more detail in the section on advertising.

All you need to know is for each dollar of sales, both companies make about $0.15 in a normal year or $0.20 when demand is white hot like it is in this COVID environment.

Traeger has a significant opportunity to become more profitable than weber as it scales with lower advertising expenses which we will dig into in the next section.

Here is where some unique differences start to show.

Traeger spent 16% of revenue on advertising and marketing compared to 30% for Weber.

This difference can be explained by Traegers larger social media following which likely translated into more word of mouth marketing.

If you tell a friend how great the Traeger grill is you’ve just potentially sold a grill that cost Traeger $0 in marketing.

Weber in contrast has a big oldschool sales network of sales reps who visit the big box stores and hardware stores around the world selling Weber grills.

If Traeger can grow to the same size as Weber eventually, these lower advertising costs mean that Treager will ultimately be a more profitable company, but at Traeger’s current size, they both generate the same amount of cashflow.

From an investor’s point of view, the more accessories and consumables (wood pellets, sauces, rubs) each company sells the better.

A grill often lasts for 5-10 years or more, while wood pellets need to be purchased regularly.

Traeger currently generates 80% of revenue from selling grills and 20% from selling wood pellets which cost about $1.00 per pound.

Traeger says that 96% of grill owners buy Traeger branded pellet’s which indicated to us that pellet sales will grow pretty closely in line with the install base of Traeger grills.

It hasn’t hurt the company either that people are grilling 25% more than usual because of the pandemic.

Weber stacks up nicely against Traeger with 25% of sales from accessories and consumables, however given Weber only sells 2 models of pellet grills compared to Treagers 8 models, they likely generate far less revenue from wood pellets than Traeger.

Longer term Traeger should have a profitability advantage over Weber due to all the money it makes from selling its own wood pellets.

Weber will roll out additional pellet grills, but we think Traeger will remain a more specialized seller and will always have a heavier weighting to pellet grills and wood pellet sales than Weber.

Growth is where the differences between these two companies really stand out.

Both companies benefitted from huge purchases by big box stores in the first quarter in anticipation of a big summer grilling season.

Weber generates almost 3x as much revenue as Traeger and is a more mature, slower growing company.

Weber has an installed base of 50M grills while Traeger says they have sold only 2M grills in the last 5 years.

Traeger has more of an opportunity to grow in the US, while Weber will need to convince international customers to grill a lot more if they want to catch up to Traeger’s growth.

Growth will slow over the next 12 months for both companies but Traeger is hands down the faster growing company and this means the stock should trade at a premium multiple to Weber.

Valuation (What the Stocks are Worth)

Valuation is where the rubber meets the road.

Where investors take all the differences between the two companies and express them through different stock prices.

What we like to do is look at the current stock price and see what the investors are pricing in.

Then you can decide if you agree or disagree.

Think the market is too pessimistic, you buy.

Think the market is way too optimistic, you stay away.

At Weber and Trager’s current stock prices of $18/sh and ~$29/sh they are pricing in revenue growth of 17% and 23% respectively for the next 10 years.

So while Trager’s current cashflow multiple of 34x is is more than double Weber’s 15x , over the long term, the market thinks Traeger will grow only 5% faster than Weber.

The most important takeaway from our analysis is that the market thinks Weber can grow revenue at 17% a year when the overall grilling market only grows 3%-4.5% in a non-COVID year.

Far less crazy is Traeger growing 23%, what investors are pricing in, when it grew at least 30% in 2019, a normal year for grilling.

So even though Trager trades at a big premium to Weber today, we think the market actually has a more realistic view about Traeger’s stock price over the long term.

As we go into the fall and winer, we think Traeger has more to lose as growth goes back to Pre-COVID levels, but over the longer term we would be buyers of Traeger over Weber.

Traeger has a technology and marketing advantage over Weber, which is huge when you are building and selling very similar chunks of steel at the end of the day.

If Traeger can become the Peloton for Grilling, the stock will do nicely for investors.

Weber on the other hand will need to ramp up the tech stack and start selling more smart grills if it wants any chance of justifiying the current stock price.

If it can do that, the stock could do well, but right now, Weber remains the nerdy older sister to Traeger’s prom queen.

Full Disclosure: The author has no position in any of the companies mentioned in this report.