The base case remains that cyclical stocks will enjoy renewed outperformance, as they did for a period last quarter, if V-shaped recovery expectations revive amid yield-curve steepening.

The 10-year Treasury bond yield has begun to rise, while COVID-19 seven-day average daily cases in the US are now running 22.9% below the peak reached on 22 July, which is encouraging (see chart below). 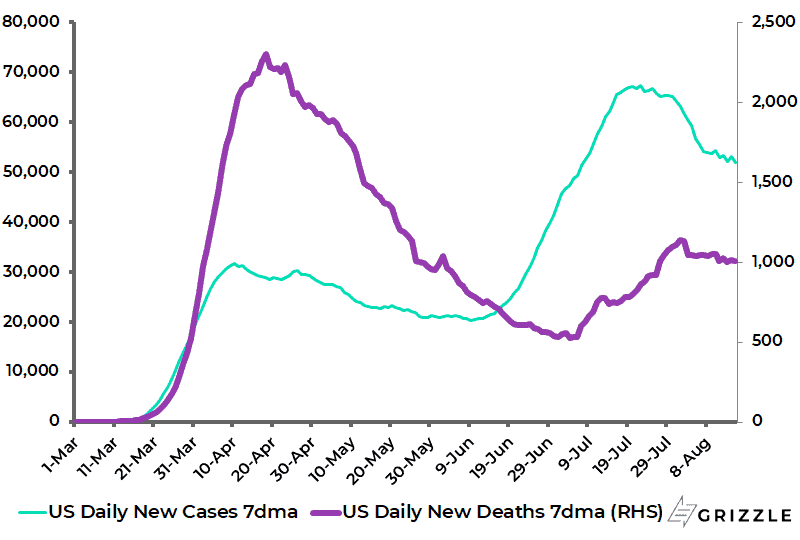 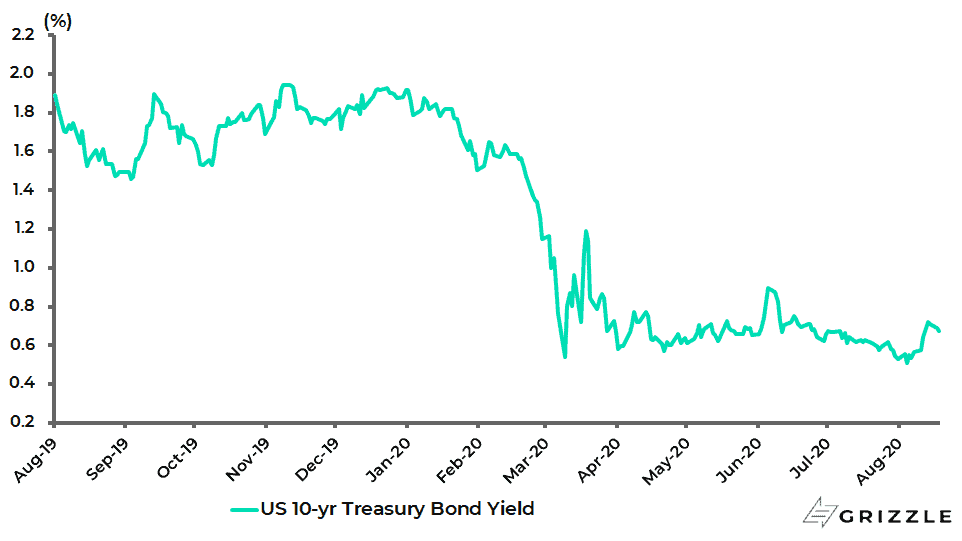 Still, in the event of such growing hopes of a V-shaped outcome, a likely decision by the Federal Reserve to implement yield curve control, as previously discussed here (The China Money Printer Is Idle, Overweight China, 4 August 2020), will then reassure investors that bond yields will remain lower for longer, which should again support high PE growth stocks.

This is why a barbell strategy of owning both growth and cyclical stocks continues to be recommended, with tactical shifts between the two.

Inflation Hinges on the Increase of Money Velocity

In this respect, it is assumed for now by this writer that the US Treasury bond market will react in a docile fashion to any announcement of yield curve control where the Fed fixes the Treasury bond yield.

But, ultimately, whether the US government bond markets revolts, and whether inflation in terms of CPI rises, will hinge on whether there is a trend change in velocity in terms of an increase in the turnover of money in circulation.

There is certainly the monetary kindling wood to unleash such a velocity-driven inflation since the monetary base rose from US$3.4tn in February to US$5.2tn in early June, though it has since declined to US$4.75tn.

Still, whether velocity picks up in the short to medium term will in part be determined by whether banks’ excess reserves increase as the Fed expands its purchases of securities under its latest COVID-19-triggered programme of unlimited quantitative easing.

Such an expansion of banks’ excess reserves is precisely what happened after the original QE programme was launched in late 2008, and this is one of the main reasons why CPI inflation did not rise contrary to the predictions of many at the time. 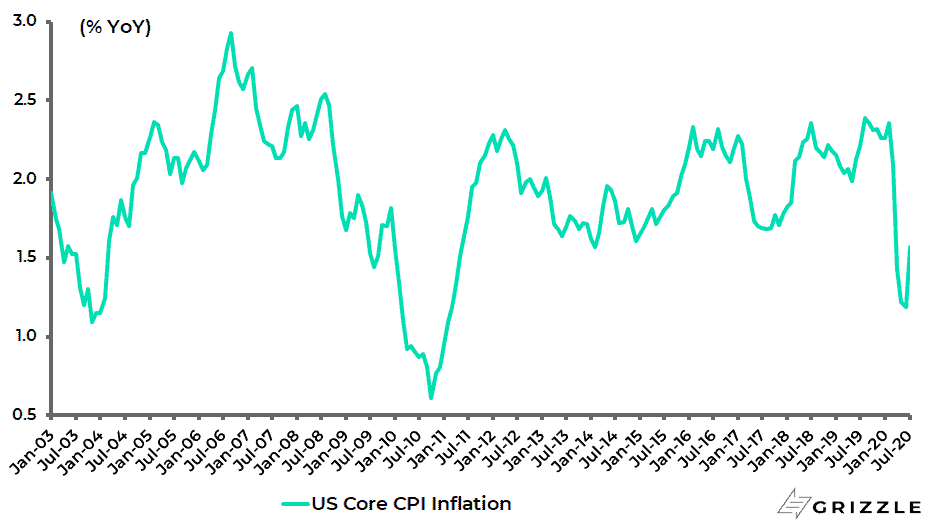 Source: US Bureau of Labor Statistics

A repeat of such an outcome would be a sign that velocity is not picking up and that the Fed’s renewed monetary excesses will again drive up asset prices rather than CPI, leading to even more concerns about rising wealth inequality.

Meanwhile the current surge in M2 and credit growth in the US, and indeed in the Eurozone, does look potentially inflationary since the aggregates continue to grow at a rapid rate. 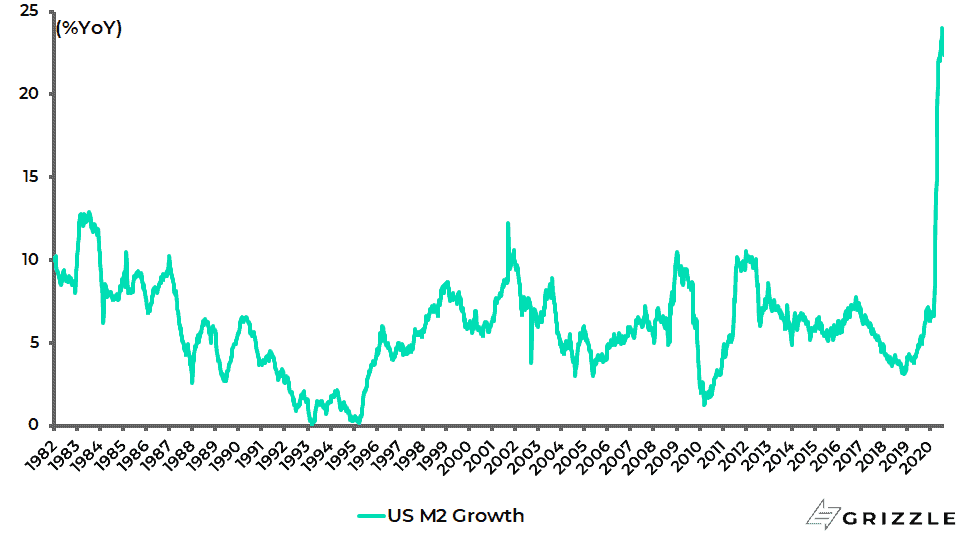 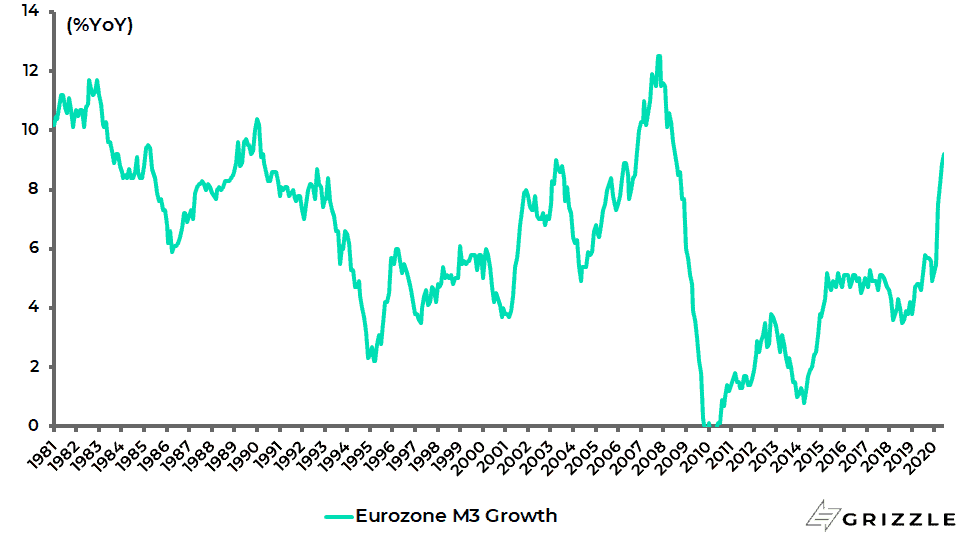 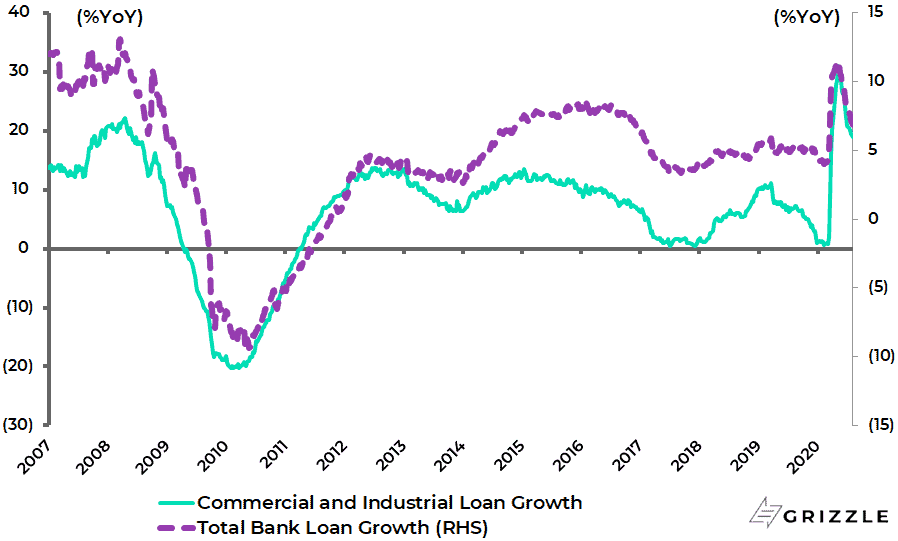 Growth in Eurozone bank loans to non-financial corporations increased from 2.4% YoY in February to 6.7% YoY in May, the highest growth since February 2009, and was 6.5% YoY in June.

But this surge in lending needs to be seen in the context of the forced lockdown of activity. To the extent that this is emergency lending to shore up corporate balance sheets and prevent bankruptcies, rather than to finance the expansion of output, it is unlikely in the short term to lead to a sustained pickup in inflation, most particularly in a world where the US corporate sector entered the pandemic crisis already highly indebted.

US non-financial corporate sector debt as % of GDP 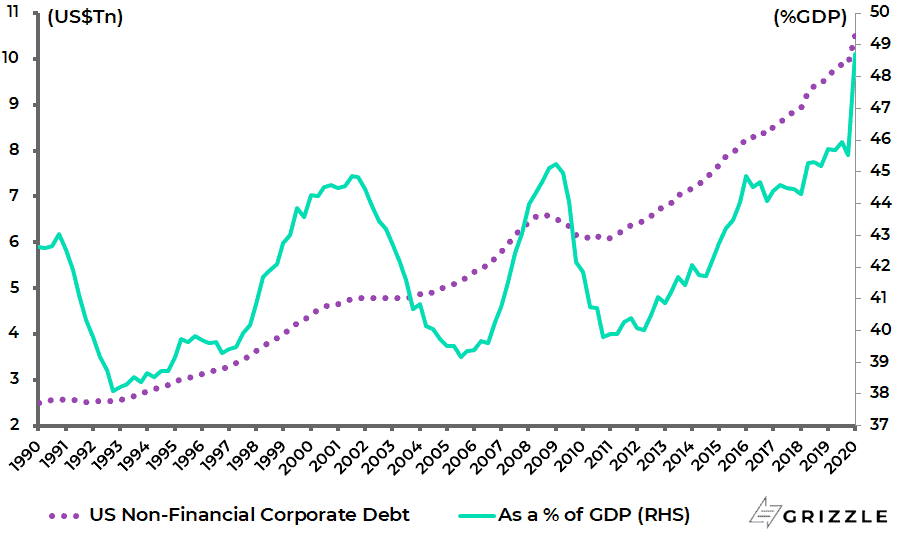 If this is the near-term outlook, it remains the case that monetary policy does not operate in a political vacuum and a US presidential election is only 11 weeks away.

In this respect, advocates of Modern Monetary Theory (MMT) are well represented in the Democratic Party and they will want to implement their policies if elected.

The key point about MMT is that it envisages a complete convergence of fiscal and monetary policy where the power of sovereign fiat paper money issuance should be used to finance “mission oriented spending goals”, to quote a phrase employed by the high priestess of MMT Stephanie Kelton, a former economic adviser to Democratic presidential candidate Bernie Sanders. (See “The Deficit Myth: Modern Monetary Theory and the Birth of the People’s Economy” by Stephanie Kelton, PublicAffairs, 9 June 2020).

But it is much more likely in the context of a Democratic administration to finance politically driven agendas such as a US$2tn Green New Deal, as the Joe Biden campaign has proposed, or the introduction of a universal income scheme.

At this point, it is only fair to point out that the proponents of MMT, such as Kelton, do acknowledge one practical limit on their central bank-financed deficit spending plans.

That is that every economy has a “speed limit” where inflation constraints kick in, which is why they recommend the use of taxation to regulate demand.

Still the practical issue is whether the bond markets and the currency markets will take fright if and when such policies are implemented.

At this point it should be noted, in the context of attempted yield curve control regimes and the like, that foreigners own 34% of the US Treasury bond market, compared with only 13% in Japan. This clearly makes it harder to control a bond revolt without the ultimate resort to foreign exchange controls.

In this respect, the pressure is more likely to come on the currency first which is why it is of note that the US dollar has weakened in recent months.

The Bloomberg Dollar Index, which tracks the performance of a basket of 10 leading global currencies versus the US dollar, has declined by 9.5% since peaking in late March. 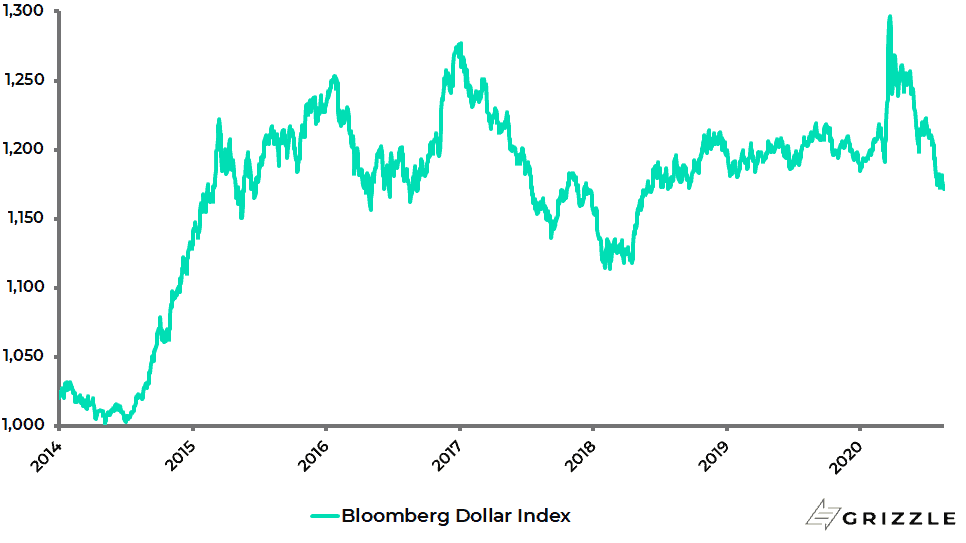 Meanwhile, a bond market revolt is the sort of catalyst that could one day lead to a trend change in velocity.

In this context, a change in the direction of velocity is extremely difficult to predict since it is primarily psychological in nature.

What is clear is that velocity does not mean revert, which is why velocity has been trending down for a long time as the deflationary drivers of debt, demographics and technology have kicked in along with, of course, globalisation, a trend that has now begun to reverse.

But once the trend in velocity turns it can really turn, as has been demonstrated in numerous historical episodes.

In this respect, it is worth quoting a sentence from a book this writer discovered recently, published in the 1970s about the German hyperinflation of the 1920s and the then ongoing US inflation of the 1970s: “People cause velocity, and they only cause hypervelocity after prolonged abuse of their trust” (see “Dying of Money: Lessons of the Great German and American Inflations” by Jens Parsson, Wellspring Press, April 1974).