The Bitcoin price and the rest of the crypto universe has come under severe selling pressure ever since the announcement by Tesla CEO Elon Musk, via a tweet on 12 May, that Tesla would no longer accept payments in Bitcoin because of the carbon generated by Bitcoin mining.

This came as somewhat of a surprise at the time since this was hardly a new issue.

It is also seemingly the case that a growing percentage of Bitcoin mining is done via renewable energy, though estimates on this front vary widely.

While a study by crypto-asset investment and research firm CoinShares even estimated in December 2019 that 73% of Bitcoin mining was powered by renewable energy. 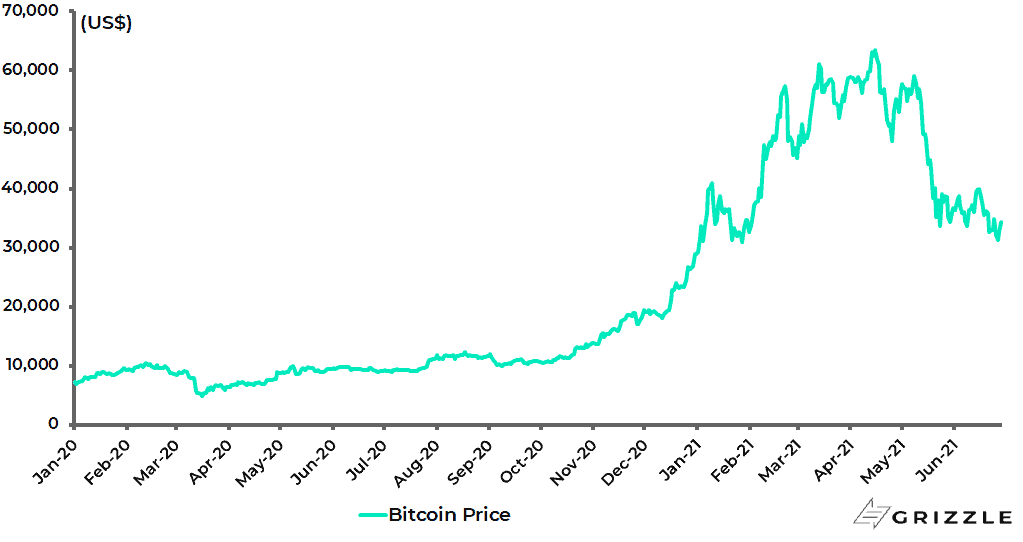 It is further the case that the making of the batteries for use in electric vehicles is also extremely carbon-intensive.

If the above raises one of the double standards behind the anti-fossil fuel debate, similar to celebrities arriving for climate change conferences on private planes, it is at least a positive to observe growing critical focus on “greenwashing”, a marketing practice which could perhaps be defined as trying to make people believe that a company is doing more to protect the environment than it really is.

This focus is a healthy development given the massive increase in ESG strategies in the investment world, and the related financial incentive to engage in what might be described as green virtue signalling.

The risk, or indeed likelihood, is that the potential for cynical exploitation of the thematic results in gross misallocation of capital, if not worse.

Meanwhile, returning to the subject of carbon generated from renewable sources of energy, it has been estimated that building a single 100MW wind farm requires some 30,000 tons of iron ore, 50,000 tons of concrete and 900 tons of nonrecyclable plastics; while a 100MW solar development requires cement, steel, aluminum and glass 150% greater than the wind farm,

The following passage from the executive summary of this recommended report is worth quoting:

“All energy-producing machinery must be fabricated from materials extracted from the earth. No energy system, in short, is actually “renewable”, since all machines require the continual mining and processing of millions of tons of primary materials and the disposal of hardware that inevitably wears out. Compared with hydrocarbons, green machines entail, on average, a 10-fold increase in the quantities of materials extracted and processed to produce the same amount of energy.

This means that any significant expansion of today’s modest level of green energy—currently less than 4% of the country’s (America) total consumption (versus 56% from oil and gas)—will create an unprecedented increase in global mining for needed minerals, radically exacerbate existing environmental and labor challenges in emerging markets (where many mines are located), and dramatically increase US imports and the vulnerability of America’s energy supply chain.”

The above is why investors should view the recent correction in copper stocks as a buying opportunity given the evident determination of G7 governments, led by the Biden administration, to fund so-called Green New Deals.

Meanwhile, returning to Musk, it remains unclear whether Tesla has sold all its Bitcoin holdings, the purchase of which were first disclosed in February.

What is clear is that Tesla made most of its money in the first quarter from carbon credits as well as from trading Bitcoin, not from selling cars.

Emissions credits accounted for US$518m in Tesla’s revenue in 1Q21 when it posted a net income of US$438m on a GAAP basis, while sales of Bitcoin resulted in a net gain of US$101m. 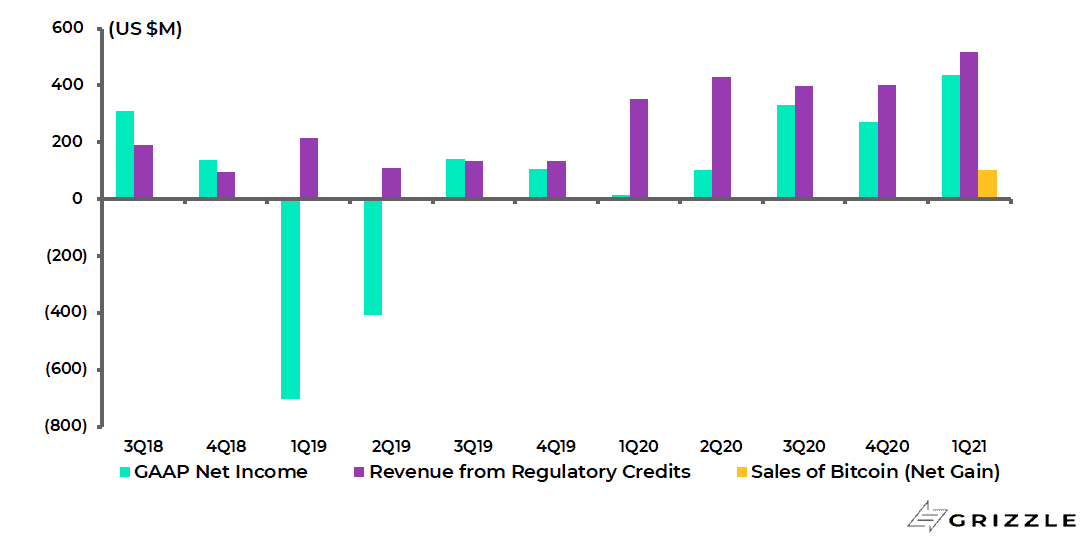 Returning to the subject of Bitcoin and crypto assets in general, it is increasingly clear that the sharp downward move in prices since the April peak, with Bitcoin down from US$64,870 to a recent low of US$28,824, has much more to do with policy in China than Musk’s tweets.

There has been growing evidence of a massive crackdown on crypto assets in the mainland.

Then last Monday the People’s Bank of China summoned the country’s major banks to a meeting where they were reminded that they are prohibited from engaging in all crypto-related activity (see Bloomberg article: “China Calls Top Banks to a Meeting to Reinforce Crypto Ban”, 21 June 2021).

Accordingly, the message has now been sent that mainland citizens cannot own crypt assets period.

This campaign has not only been driven by a legitimate concern that stablecoins like Tether are used to circumnavigate China’s closed capital account.

But, more importantly, it seems evident that the Chinese Government does not want any competition when it rolls out its digital renminbi nationwide, which the latest estimates suggest could happen before the end of this year.

None of this should surprise unduly since it is clear that blockchain technology is the antithesis of China’s collectivist system.

Blockchain’s decentralized nature makes it far more complementary to the practice of free-market capitalism, in the sense that famed Austrian economist Friedrich von Hayek would have understood it, in terms of responding to market signals.

In this sense, it is the opposite of the “fatal conceit” represented by believers in economic planning, to quote one of Hayek’s more telling phrases (see book “The Fatal Conceit: The Errors of Socialism” by Friedrich Hayek, University of Chicago Press, 1988).

The blockchain also represents a long-term threat to the dominance of Big Tech.

For under so-called Web 3.0 the users of the platform are the owners.

Whereas under Web 2.0 users may have benefitted but all the value has accrued to the owners of the platform, be it an Alphabet or a Facebook.

Meanwhile, the coming rollout of the digital renminbi promises to be a landmark development that will give the Chinese Government total transparency on the savings and spending habits of its citizens, as well as potentially improving the provision of direct fiscal stimulus to its individual citizens in what after all will be programmable money.

It should also in the longer-term lead to a growing international role for the renminbi.