The mythical “Sleep Economy” got its start in 2014 on the New York City subway, where commuters were force fed mattress ads blanketing the subway cars.

Casper (NYSE: CSPR) arguably founded the direct to consumer (D2C) foam mattress model and has been one of the main beneficiaries of a market that grew from almost nothing in 2014 to reach an estimated $3 billion in 2019.

A whole lot has changed in the D2C mattress peddling game since then.

Casper is now just one of more than 150+ companies selling mattresses online and even the slow-moving brick-and-mortar mattress brands are selling D2C foam mattresses of their own.

We’ve published the most comprehensive industry analysis on the the “Sleep Economy”. Is Casper a worthy growth investment or a money hemorrhaging bed bug?

The Quick and Dirty on Casper Stock

Casper sells a product that is being copied by more and more competitors.

The company uses one of four large manufacturers and doesn’t own any intellectual property making it hard to stand out from the crowd.

Revenue growth is slowing, while profitability is nowhere in sight.

Even if the company generates profit margins in-line with peers who are already profitable, the stock is worth at most $8.00/sh in 2020, 33% lower than the expected IPO price of $12.00/sh.

This is a stock you should avoid unless management can accelerate growth or you can buy in at a bargain-basement price below $8.00/sh.

The State of the Mattress Industry

Casper is selling itself as a disruptor of the “sleep economy”, a new term created by someone on the marketing team who probably received a tropical vacation for their efforts.

This previously undiscovered sleep economy is apparently already worth $432 billion growing to $585 billion in five years.

This slide from Casper’s prospectus makes it look like the company’s $360 million in 2018 sales are just scratching the surface.

However, if we dig a bit deeper something just doesn’t add up.

Do we need to keep going?

After reading the true meaning of sleep economy it made more sense why we couldn’t get to sales above $10 billion when we added up mattress sales for the six largest online and in-store mattress sellers.

Yes we are probably missing a few dozen smaller brands, but there is no way we were getting from $10 billion to $79 billion. 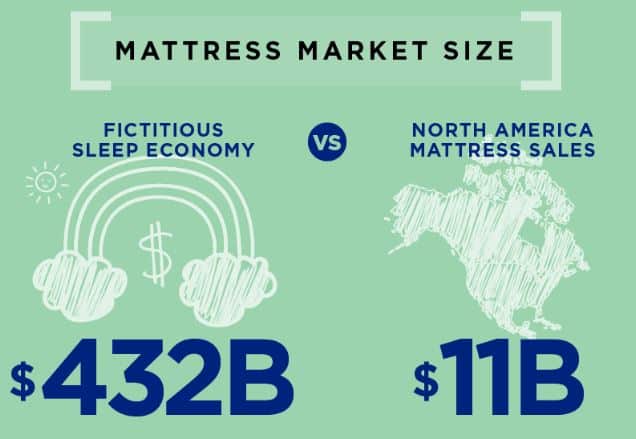 The real North American “sleep economy” turns out to be a mattress market worth around $11 billion today, growing 15% a year to $25.8 billion by 2025 according to Grandview Research.

We only use the North American market because neither Casper nor any competitor we know of is showing meaningful growth outside of the U.S. and Canada.

These are North American-centric companies for the foreseeable future. 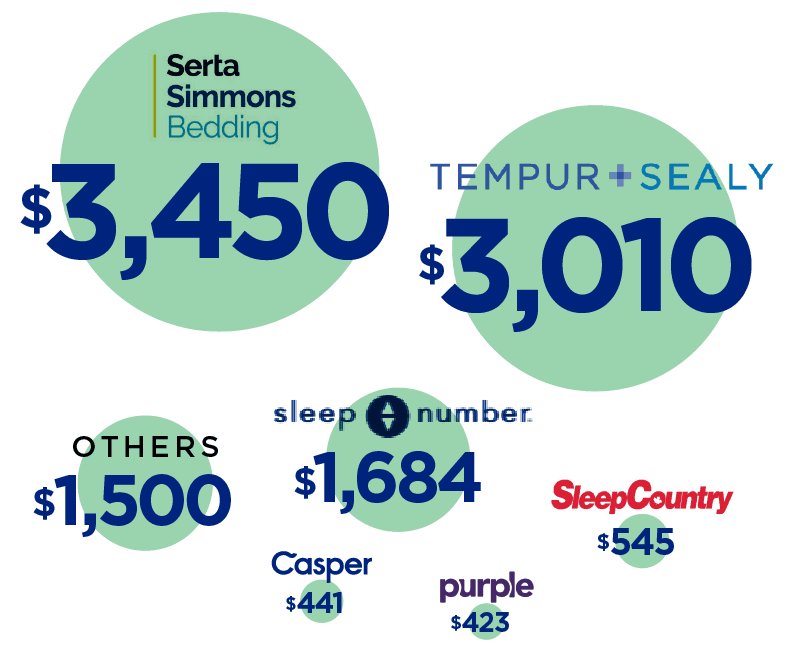 The mattress market may be growing at 15% a year, but the online-only model is showing signs of maturing with Casper’s D2C growth falling to an estimated 17% in 2019 from 42% in 2018 while public competitor Purple is only growing D2C sales 7% so far in 2019.

As online competition heats up, Casper can no longer rely on the D2C channel to grow more than 15% a year at best, far below growth rates of the last few years.  They will have to lean on the less profitable wholesale channel or capital intensive brick-and-mortar store model to grow.

Most online mattress companies source their beds from one of four major suppliers and Casper is no different. 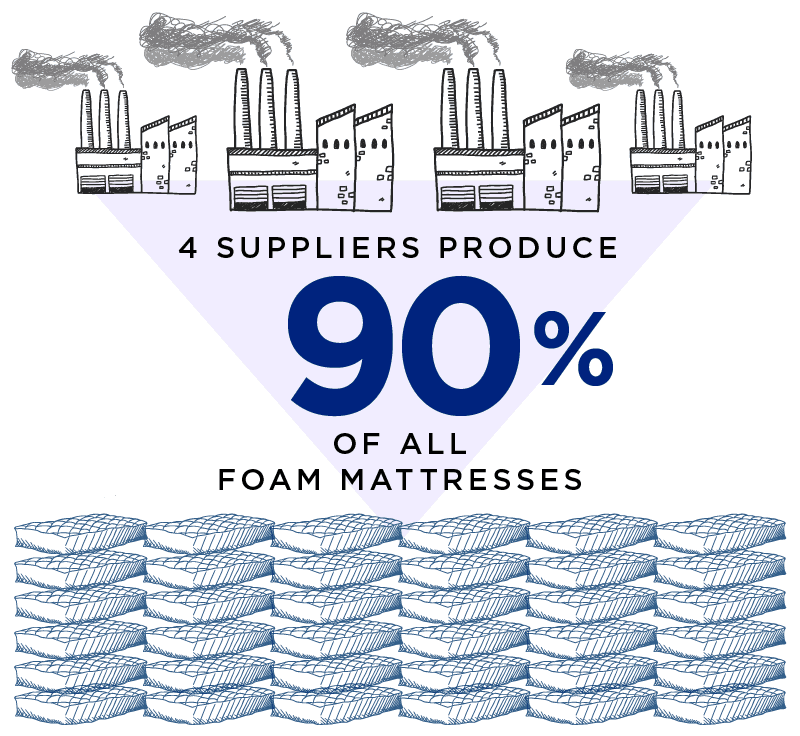 The decision not to create patented products in-house has come back to bite the company as they now are struggling to stand out in an increasingly crowded field.

Casper isn’t benefitting from the same economies of scale as if they produced mattresses in-house.

With online ads costs increasing and competitors popping up left and right, Casper is in an increasingly contentious battle for market share.

How Does Casper Stack up Against the Competition?

When we started looking into Casper’s business model we were pleasantly surprised to see a direct competitor that’s already been public for almost two years.

So how does Casper stack up next to this competitor, Purple Innovation (NASDAQ:PRPL)?

The answer is not well.

Drilling down to the online business, growth is even slower at 17%, which we think signals online competition is heating up.

Compared to Purple who is growing revenue at 50%, Casper seems to be hitting a wall. 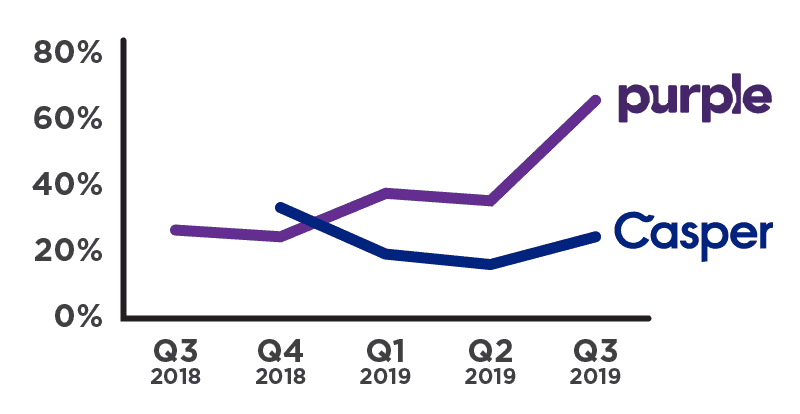 Slower growth is all good if a company is profitable, but here again, Casper comes up short.

Casper is almost the same size as Purple yet it loses $0.20 for every dollar of sales compared to Purple’s $0.10 of profit.

Most confusing to us is why Casper spends 35% of revenue on payroll while Purple is the same size, yet spending only 7%. 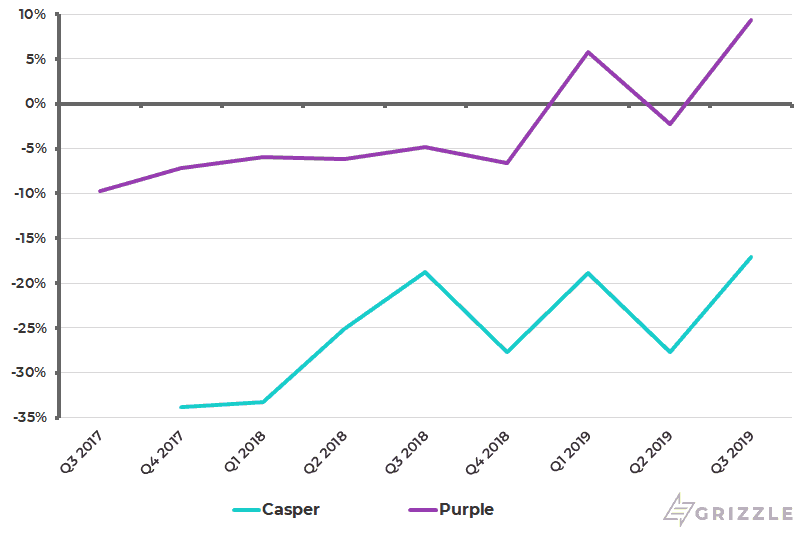 Summing it all up, investors are left with a company growing slower than its peers while also losing far more money.

This is a recipe for a valuation disaster which is already coming true with the IPO price coming in 60% below the last private funding round.

Valuation (The Problem with Purple)

Having a direct public comparable must have been a nightmare for Casper management.

Casper started IPO meeting with investors asking for up to $19/sh but that price quickly fell apart.

Investors probably told them, “I can buy the stock of Purple, a faster-growing, more profitable company with a patented bed design for a 20% discount to what you are asking. Why in the world would I buy this IPO?”

The fact that Casper ended up going public at a 25% price to sales multiple discount to Purple shows us just how tough the conversations with investors must have been. This was a disaster of an IPO. Management only went through with it because they needed the money. 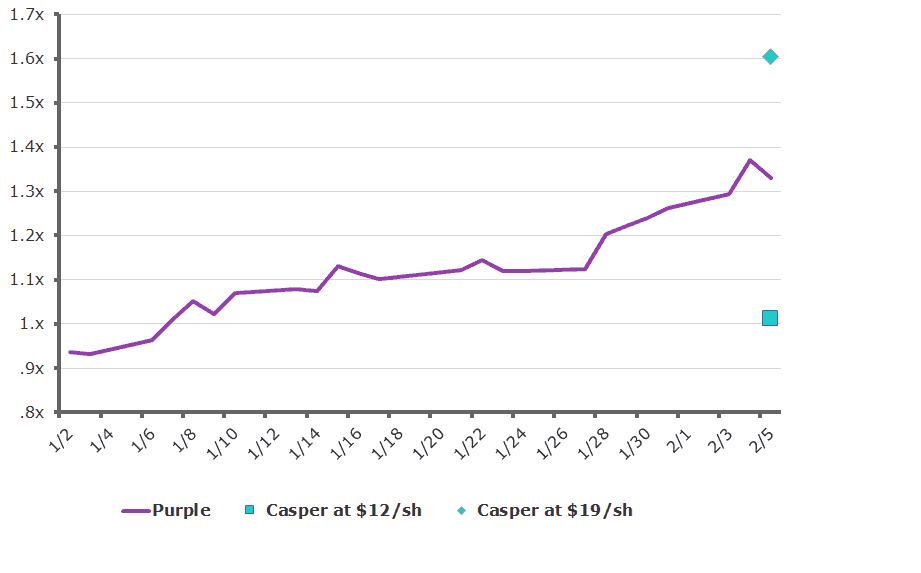 This chart actually makes it look like there is 30% upside in Casper if management can reignite growth and trade in line with Purple.

However, this chart is misleading and once we dug into the potential profitability of Casper longer term we realized there is more downside to come.

Casper Ultimately Worth only $8.00

The market prices companies on a multiple of sales when they are unprofitable and then switches to a multiple of earnings once they are.

For this reason, we wanted to see if there was upside in Casper if the company managed a Hail Mary and turned profitable.

Casper spends 35% of revenue on payroll compared to Purple’s 7% so we figured this would be where the cost improvements mainly come from.

Assuming a best-case scenario where Casper cuts payroll to only 7% of revenue they would generate a net income margin of 6% or 4.4% after tax.

So even if Casper dramatically cuts costs and reignites growth the slim margins point to a stock that is still overvalued, even with a 36% cut to the IPO price.

Management is effectively trying to make investors pay a 2022 valuation in 2020.

Below $8/sh we would be buyers of Casper as an upside surprise in growth is no longer priced in.

The stock should trend higher with revenue growth over time, but is overpriced in the here and now.

Understanding who owns the shares and at what prices is absolutely critical if you choose to trade newly public stocks.

Insiders are generally always required to hold their shares for between three to six months so the stock will be unusually volatile while there is a scarcity of shares available to trade.

Small changes in buying and selling volume are magnified and the stock price can really move, both up and down while this is going on.

Historically once the founders and insiders are permitted to sell their shares, the stock typically falls for a period of time before fundamentals bring in new buyers who bid the price back up.

Understanding when the shares ‘unlock’ and the size of gains insiders are sitting on are two key pieces of information you need when investing in or trading a newly public stock.

Looking at the history of capital raises for Casper, company insiders are sitting on much smaller gains than we’ve typically seen from startups.

Yes the founders and early investors are sitting on 600%+ gains, but their shares will represent only 20% of shares outstanding once the company goes public.

The rest of the shares were purchased for between $22-$31 per share meaning insiders as a whole are just barely breaking even if the stock IPO’s at $18/sh as planned.

IPO shares will make up 24% of the share count, larger than the 17%-20% we typically see. This is a sign management is going public to raise cash and cares less about worse than average dilution to the value of their stake.

A lack of insider gains tells us there should be relatively less selling pressure compared to other IPOs but there are still 9 million shares acquired for less than $3.00 that could weigh on the stock price if founders want to realize some gains. 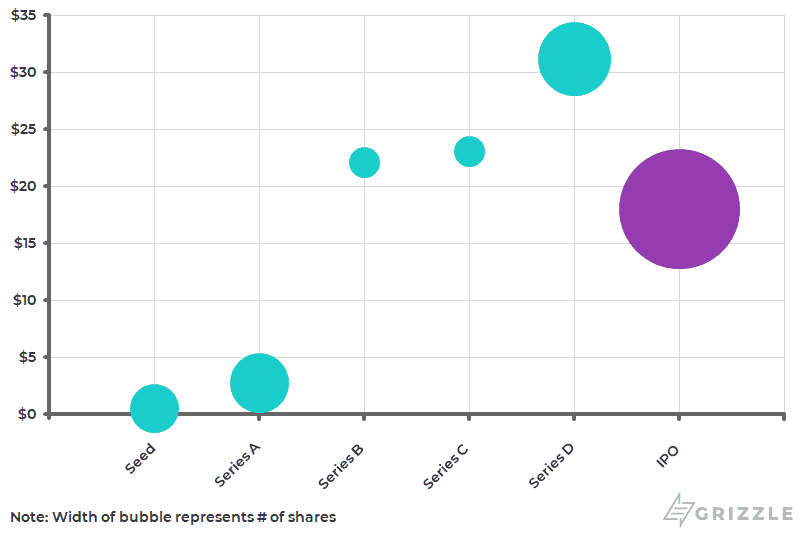 As is typical for an IPO, insiders will be required to hold their shares for 180 days after the filing of the prospectus.

When Can Casper Insiders Sell Their Shares?
We expect the final filing document to go live on Thursday, Feb. 6 which would mean the shares will come off lockup 181 days later which falls on Aug. 5 2020.

Specific language in the prospectus makes it sound like the banks who worked on the deal can technically unlock the shares at any time, letting insiders sell into the market.

After only 90 days, insiders can sell up to 1% of the shares outstanding, 400,000 shares, or an amount equal to the average weekly trading volume, whichever is larger.

Bottom Line: Be aware that the stock price will likely take a hit around Aug. 5 so plan your entry and exit accordingly.