The minute WeWork management saw their initial $47 billion offer fall on deaf ears they had to know the IPO was in jeopardy.

With the rumoured offering price now below $20 billion, the writing is on the wall that a WeWork IPO will never happen in 2019.

For both management and early investors, an IPO is a way to see a quick spike in the value of the company through public price discovery while also providing a profitable exit opportunity for pre-IPO stakeholders.

Now that rumours are swirling, WeWork will be lucky to go public at even half the valuation where it last raised money, both the expected spike in value and profitable exit have all but disappeared.

Paradoxically, now that SoftBank, WeWork’s largest and most supportive shareholder, stands to lose at least $2.6 billion if the IPO proceeds, they are likely now doing everything in their power to postpone it.

Follow along as we explain why WeWork is worth less than $10 billion and why an IPO delay is the most likely path forward.

We are certain WeWork decided to go public because it needs cash, badly. What we are less certain about, is if the cash ultimately comes from the private or public markets.

Now that SoftBank is all but assured a loss on their investment if WeWork goes public, Masa Son may decide it is worth throwing more money at the problem in an effort to save his initial investment.

Keeping WeWork private could allow the company to pursue a profitable future IPO, change their business model or at least allow SoftBank to put off having to realize big mark to market losses.

Keeping WeWork private would require SoftBank to go all in.

With an annual cashflow burn rate of $6 billion between operations, investing and leases, WeWork needs cash and lots of it.

With WeWork already making up 15% of the invested capital of SoftBank’s Vision Fund, upping the bet to 20% would be a huge gamble.

Even if SoftBank is willing to put up $6 billion, it still has to contend with an IPO and public debt raise that would put $9 billion into WeWork’s pocket, funding the company for 6 months longer.

WeWork CEO Adam Neumann will have to decide between liquidity risk for a higher payout or valuation risk to ensure access to liquidity.

We think if Neumann can raise the needed funds privately at a higher valuation than the IPO, the IPO will be postponed until a later date, however, if the IPO by some miracle proceeds, know it was done because management had nowhere else to turn for cash. 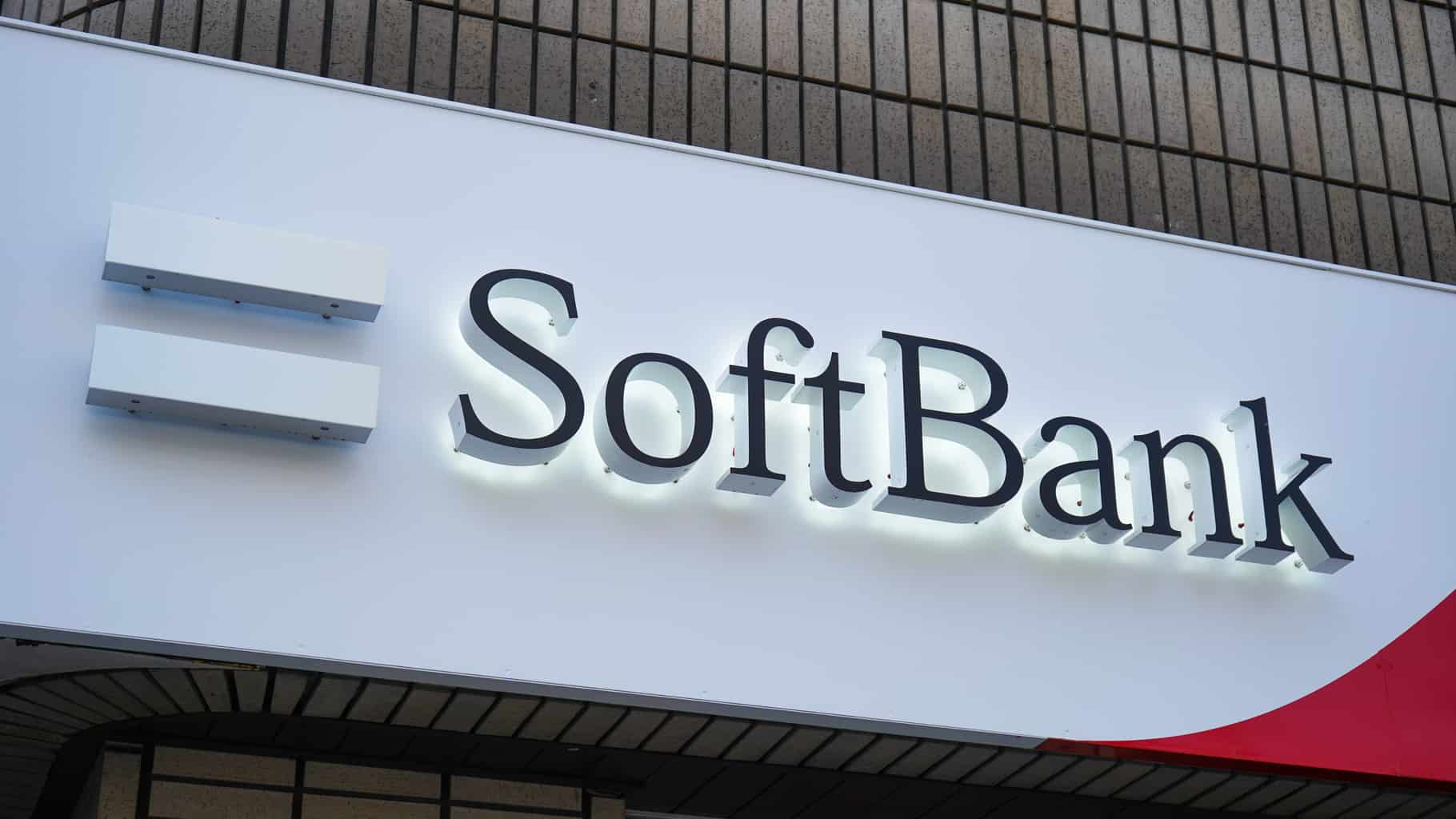 The SoftBank Strategy is Showing Some Cracks

The SoftBank business model, pioneered by its founder Masayoshi Son, is to invest big regardless of the cost.

Masayoshi Son intimately understands the power of market sentiment and he uses momentum to his advantage.

SoftBank funding is the only reason Uber didn’t go public below the already lowered $45/sh value and why WeWork even dared to ask the market for a $47 billion valuation at first.

The SoftBank strategy is starting to show some cracks.

Overpaying for assets works as long as new investors are willing to pay even more inflated prices, giving you a profitable exit.

Now that portfolio companies from the SoftBank Vision Fund are going public, we are seeing investors balk at paying the inflated values created by SoftBank.

In the case of WeWork, SoftBank has already put in $10.65 billion and is by far the largest outside shareholder.

The WeWork investment represents 11% of SoftBank’s entire Vision Fund, making this a surprisingly concentrated bet for such a large investing entity.

SoftBank is sitting on $600 million of losses from its investment in ride-hailing company Uber and would be down a further ~$2.6 billion if WeWork goes public at a $20 billion valuation.

We think SoftBank has a strong incentive to keep WeWork private for three reasons:

It’s clear to us and becoming clearer to the markets that WeWork is pursuing a business model that isn’t fit for public markets.

It potentially isn’t fit for private markets either.

WeWork currently charges $4,500 a year for a desk while the standard cost per employee for a typical company is $17,000 a year.

$4,500 is below the $4,800 WeWork spent to maintain a desk in 2018, telling us the company is effectively selling workspace at cost to gain market share from peers. 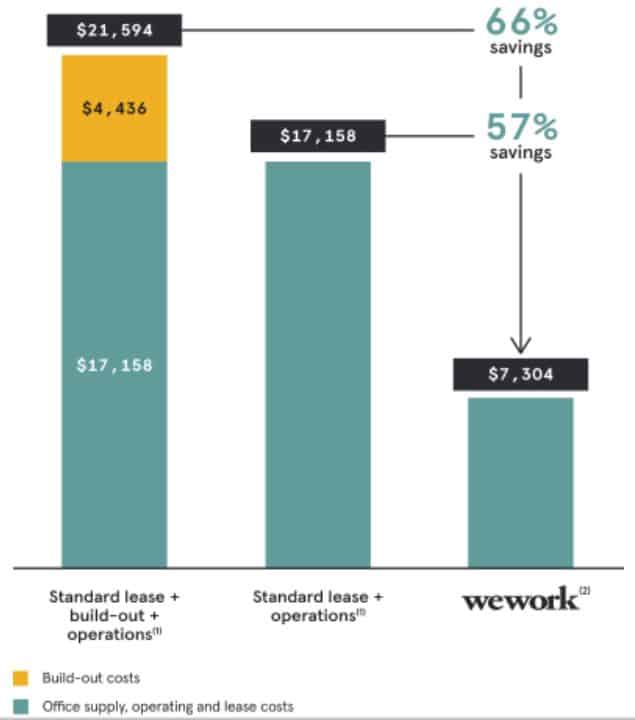 Source: WeWork S-1. *Grizzle’s revenue per desk estimate is different than WeWork’s estimate in the S-1

This model is extremely aggressive as it requires both continued debt and equity funding to pay for expansion and a doubling of desk prices down the road,

Price increases would require strong negotiating power and have a big negative impact on the company’s ability to add and retain members.

Problem #2: Per Desk Economics are Broken

WeWork generates revenues of $4,500 per member in the first year, but spends $11,500 on costs like building the members desk, advertising and sales to close the contract, operating expenses and maintenance to keep the desk in good shape. 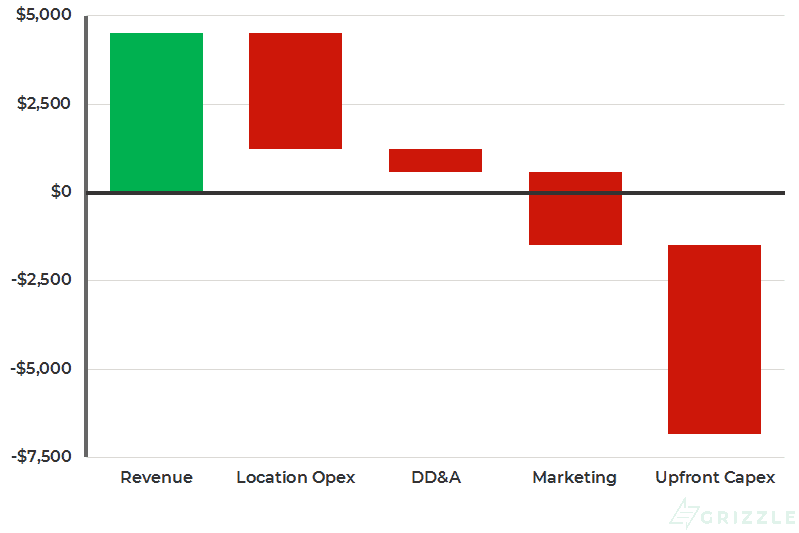 In year 2 and beyond, with capital costs largely behind them, the desk generates about $570 of cashflow. At this cashflow rate WeWork would break even on a desk in year 13.

However, the average member only stays with WeWork for two years and four months, not 13 years.

When we include ongoing marketing expenses to keep each desk filled, the payback period for a new desk is more than 30 years, with a negative rate of return.

Under the current business model, WeWork will have to raise prices by 60% or cut direct and corporate costs in half to turn a profit.

It may be gobbling up market share in the commercial real estate business, but the end goal of profitability looks like it is nowhere in sight.

Even if WeWork cuts all growth expenses and turns a profit, it will only be worth at most $10 billion* as a mature, property rental company.

Problem #3: WeWork’s Public Competitor Trades for a Much Lower Multiple

IWG Plc, previously Regus Plc, is the largest co-working company in the world with 3,300 locations and 2.5 million members compared to 528 locations and 540,000 members for WeWork.

The desk-for-hire model is not new and IWG has been in the business for more than 20 years.

In the early 2000s IWG was a stock market darling growing at 60 – 100% a year, similar to the growth WeWork is seeing today.

Yet the stock peaked at a price to sales multiple of four times and went bankrupt two years later.

Seeing as IWG is growing revenue less than 8% and trades today for 1.4 times sales, WeWork should price somewhere between $5-$15 billion.

Investors who argue that WeWork’s superior growth (70% vs IWG at 7%) deserves a much higher multiple, obviously haven’t done their homework on the history of IWG.

WeWork’s valuation is stuck in a catch-22.

The company needs to stop spending on expansions if it wants to turn a profit anytime soon, but as a mature company it would then trade on the lower multiple of IWG.

Even if it becomes a slow-growing mature business, fundamentally WeWork is not worth more than $10 billion. 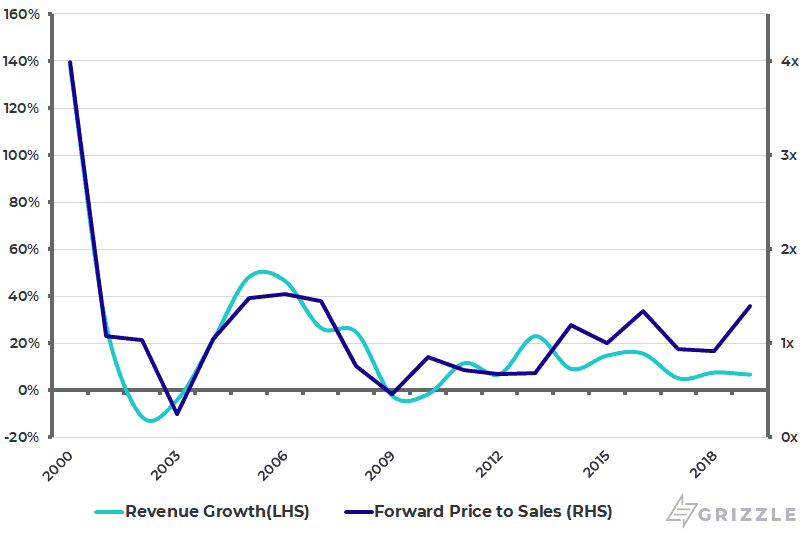 Our greatest hit list of red flags from the WeWork S-1 should be enough to scare away even the most degenerate stock market gambler.

WeWork’s uber aggressive market share at all costs strategy, fundamental business model issues and corporate governance missteps will make it impossible for the company to go public at anywhere near the valuation they will be happy with in our view.

If WeWork Goes Public It Will Be Out of Desperation

With deep-pocketed SoftBank desperate to avoid losses, WeWork is in a good negotiating position to ask for more money at a higher valuation than they will currently get from the public markets.

With deep-pocketed SoftBank desperate to avoid the losses that would come with a sub $20 billion listing, WeWork is in a good negotiating position to ask for more money at a higher valuation than they will currently get from the public markets.

Ultimately, WeWork will choose the funding source that satisfies the company’s need for lots of cash while offering the best terms.

If the IPO does ultimately proceed, it will tell us CEO Adam Neumann chose liquidity over valuation.

He has already made his millions and does not feel the need to get cute with the valuation by staying private, when doing so would see him operating with a smaller cash cushion.

It looks to us like the public markets may be the only place where WeWork can raise the $12 billion it needs to stay solvent into 2021, while maintaining a valuation above $15 billion.

Regardless of the outcome,  the WeWork IPO process will go down in history as one of the most drama-filled in modern times.