Italian Politics: The Calm Before the Next Storm

Europe remains a potential source of angst for financial markets in the form of another existential crisis for the Eurozone. True, stock markets have relaxed over the past week in part because of relief that another Italian election has been avoided for now and in part because US dollar upward momentum has stalled (see following chart). 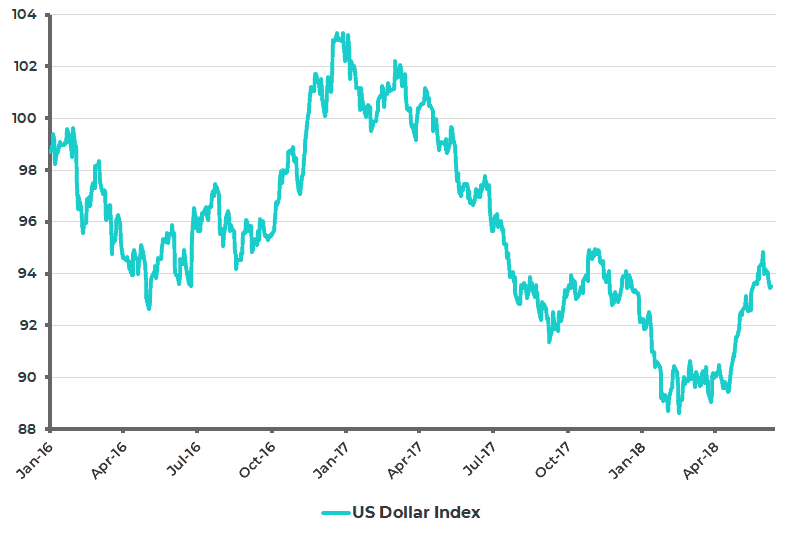 Conflict in Italy — When Will It Come to a Boil?

The coalition government’s economic policies will likely conflict with the fiscal rules set by Brussels.

On Italy this is likely just the calm before the next storm given the Five Star and League coalition government’s economic policies are almost inevitably going to be in conflict with the fiscal rules set by Brussels — though the confrontation may take longer to come to a boil because of the presence of technocrats in the new government, a compromise required by Italian president Sergio Mattarella for the government to be formed on June 1.

There will also doubtless be hopes on the part of the political establishment that the differences in ideologies between the left of centre Five Star and the right-wing League will become evident in the everyday practice of trying to run a government resulting in due course in both ‘populist’ parties being discredited in the eyes of the electorate. 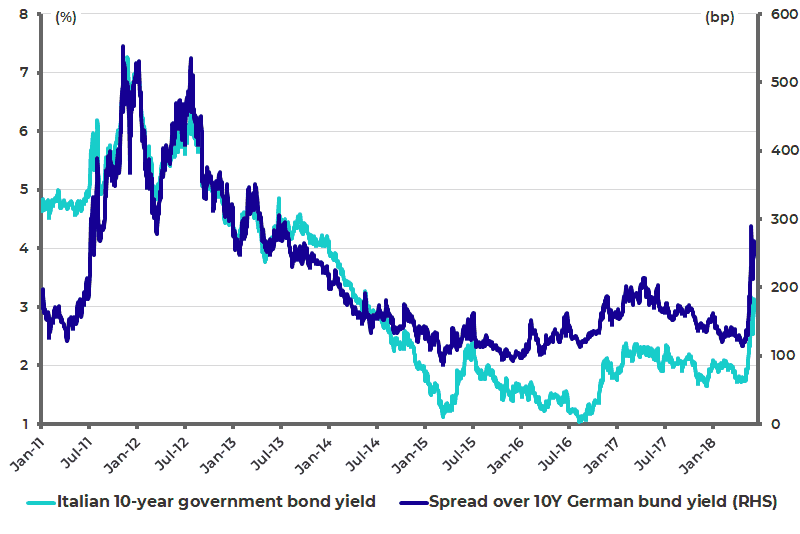 The ECB and the Eurosystem — Italy’s Greatest Creditor

The other point to consider with an Italian populist government now in place is how the ECB will react in terms of the signals sent given that the ECB and the Eurosystem is the single largest holder of Italian government debt. The ECB and the Italian central bank held €371 billion of Italian general government debt securities at the end of March, accounting for 19% of the total outstanding, according to the Bank of Italy (see following chart).

ECB and Bank of Italy Holdings of Italian Government Securities 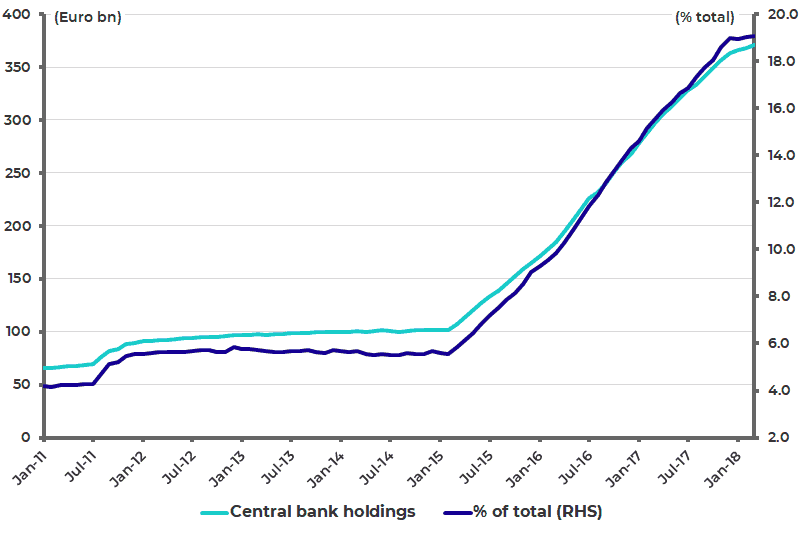 He specifically warned Italy that the so-called “Outright Monetary Transactions (OMT) programme”, designed for intervening in Eurozone national sovereign bond markets during a crisis, can only be used if the country in question also agrees to a fiscal adjustment programme.

It should also be noted that a country needs to maintain at least one investment-grade credit rating to qualify for ECB purchases of its debt or ECB reinvestment of its maturing government bonds.

Certainly, the ECB will now be at pains to stress that its ongoing monetary policy will not be driven by Italian specific issues. This means the focus will remain at the next ECB meeting (June 14) on when ECB ‘quanto easing’ will end. If this is by the end of this year, as some think, that will raise the issue of who is going to buy the Italian bonds, and at what price, which the ECB will no longer be buying in 2019.

Italy vs Brussels: The Inevitable Showdown

The most probable outcome remains a confrontation with Brussels.

Meanwhile, new Italian Prime Minister Giuseppe Conte’s inaugural speech on Tuesday outlined tax and spending policies that will put Italy in direct conflict with Brussels. This is why the most probable outcome remains a confrontation with Brussels.

The Five Star and the League had previously published on May 18 a 58-page document, or “government contract”, outlining their policies which call openly for a review of Italy’s economic status as well as for aggressive fiscal stimulus, be it by both tax cuts and increased welfare spending. Five Star, for example, proposed government-financed universal income schemes.

The question will then become how Brussels and Berlin respond. Will they react negatively and try to enforce austerity on Italy, thereby risking an Italian exit just as a Greek exit was risked earlier, or will the scare provided by the reality of an openly euroskeptical government in Rome force Germany to sign up belatedly to French President Emmanuel Macron’s proposals to move towards greater fiscal integration, banking union and the like?

Populists Gaining Support, but Will Italians Risk Their Savings by Exiting the Euro?

Meanwhile, the opinion polls continue to indicate decent support for both ‘populist’ parties with the League’s support actually growing. An opinion poll conducted on May 30 to June 4 shows the League’s support rising to 27.2%, up from 21% in late March, while Five Star’s support declined from 34.1% to 30.9% over the same period (see following chart). But the critical issue in any future election, which is hard to know at this point, is whether the Italian electorate is willing to countenance the threat to their savings and pensions that would result from exiting the euro. 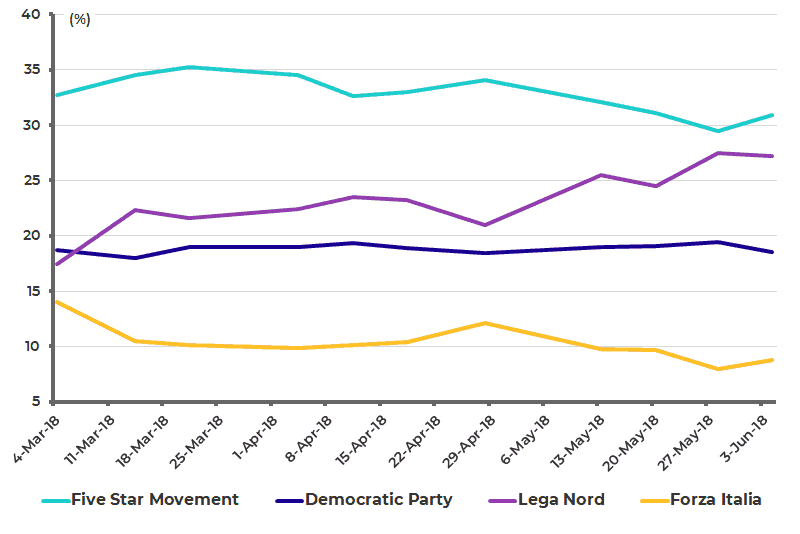 Italian GDP has only risen by an annualized rate of less than 0.5% since 1999.

This was the issue that stopped Greece’s exit. But the difference between Greece and Italy is that Greece enjoyed a long party courtesy of the Eurozone’s low interest rates triggered by the country’s entry into the Eurozone in 2001 before it suffered an admittedly very long hangover from which it is only now just emerging.

Italy, by contrast, has never even had a party as reflected in the charts of Italian GDP and Italian GDP per capita since the euro’s formation at the beginning of 1999. Thus, Italian real GDP and real GDP per capita have risen only by an annualized 0.4% and 0.1% since 1Q99 (see following chart). This is why the Italian electorate has decided to vote for the reflationary policies of the League and the Five Star. 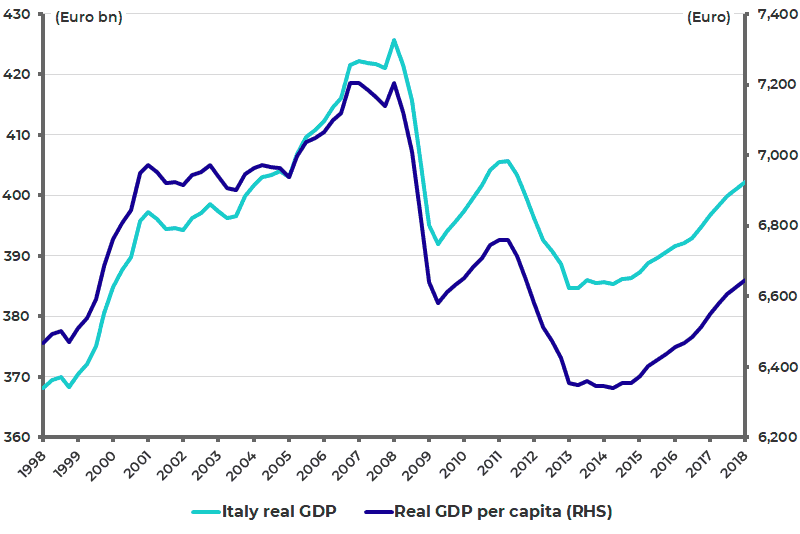 From a broader Eurozone perspective the current conventional wisdom is that the political crisis in Italy has now made support for French President Emmanuel Macron’s fiscal integration agenda a non-starter since it has revived German fears of burden sharing, bailout unions, and the like. This may be true so far as it goes. But the reality is that Macron is entirely correct that the current status quo is not sustainable in the Eurozone (i.e. either the Eurozone moves incrementally to a more coherent fiscal union to complement monetary union or the growing political pressures will lead, inexorably, to a break up).

On this issue, Angela Merkel finally broke her silence on her reaction to Emmanuel Macron’s proposal for greater fiscal integration, first made in a speech by the French president in Paris last September, in the form of a detailed interview with the German newspaper Frankfurter Allgemeine a week ago.

Her reported comments make it clear that Merkel wants to move very slowly in terms of greater integration with her concept of a future European Monetary Fund very different from that proposed by Macron. She sees it more as a tool for strengthening budgetary discipline, whereas the French president views it primarily as a vehicle for promoting fiscal integration.