There have been remarkable developments on the Korean peninsula of late. The flurry of events began at the Winter Olympics on the artificial snow of Pyeongchang in South Korea in February.

This was truly historic since it is the first time such senior figures from the North Korean regime have visited South Korea since the division of the peninsula in 1945.

What the event will be most remembered for is the charm offensive launched by the North Korean regime targeting South Korean public opinion. Kim Jong-un’s sister Kim Yo-jong was at the opening ceremony and Kim Yong-chol, vice chairman of the Central Committee of the ruling Workers’ Party of Korea, was at the closing ceremony.

This was truly historic since it is the first time such senior figures from the North Korean regime have visited South Korea since the division of the peninsula in 1945.

That created the temptation for South Korean President Moon Jae-in, long an extreme dove on the North Korean issue, to accede to Pyongyang’s invitation to visit the North. The result was the meeting between the South and North Korean leaders on Friday at which there was an agreement to work towards a peace agreement to formally end the Korean War 68 years after it began.

Pyongyang’s strategy seemed initially designed to drive a wedge between Washington and Seoul. But after the successful exploitation of the public relations opportunity provided by the Winter Olympics in Pyeongchang in February, the first ever meeting between the leaders of North Korea and the US by May was announced in March even though no specific date has yet been set.

This latest development confirms that there has been more dialogue between the US and North Korea in recent years than what has been admitted to in public. Meanwhile, further evidence that talks have been underway came from Donald Trump’s revelation in mid-April that then CIA Director and now Secretary of State Pompeo made a secret visit to Pyongyang over the Easter weekend.

This impression was further re-enforced with the announcement by Pyongyang on April 20 of a total freeze of its nuclear and missile development. North Korean leader Kim Jong-un told the Central Committee of the ruling Workers’ Party of Korea that day that he would stop nuclear tests and launches of intercontinental ballistic missiles from April 21 and would shut down a major nuclear test site.

What is North Korea’s Real Motive?

The North Korean won has been trading at around 8,000/US$ since early 2013 — life has become a bit better for the average North Korean.

While huge skepticism is in order, the above announcement has raised the possibility that Kim Jong-un really wants to open up his economy of 25 million people to development.

In this respect, it is not widely understood that he has been following more pro-market policies since assuming power in December 2011, a policy that has been reflected in a stable North Korean currency over the past five years.

The North Korean won has been trading at around 8,000/US$ since early 2013 (see following chart). As a result, life has become a bit better for the average North Korean. 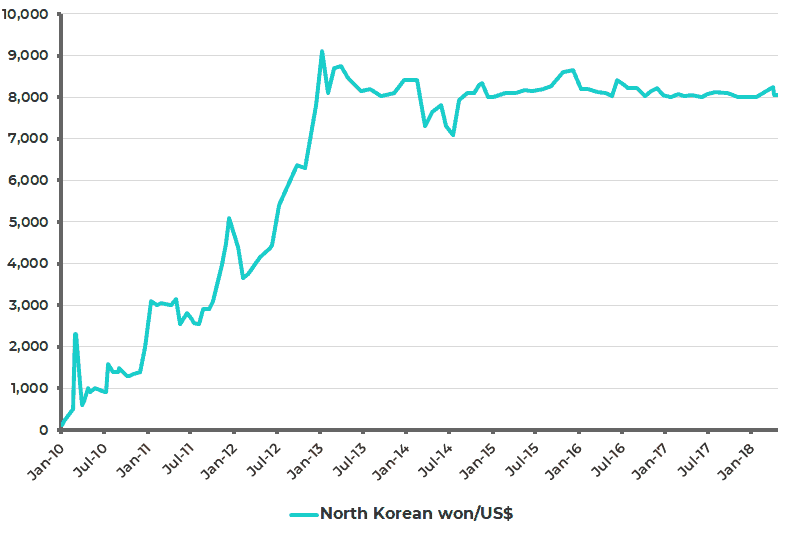 Despite talk from Washington that the US will insist on denuclearization, the base case must be that Kim will not be willing to abandon his nuclear weapons given that it will remove his leverage, not to mention the unfortunate fate of the last political leader who agreed to surrender his nuclear weapons, namely Libya’s Gaddafi. Presumably, Washington understands that despite Trump’s rhetoric to the contrary. If this is the case the question becomes whether a deal can be done on a North Korean commitment to end nuclear escalation.

What Impact Will Korean Peace Have on the Asian Economy?

Certainly China would welcome a North Korean economy that is pursuing a more market oriented course, though it will also want to maintain North Korea as an independent state. This is why it is also interesting that Kim visited Beijing in late March. This followed a period of distinctly cool relations between China and its ally, with China having seemingly cut back drastically on fuel exports to North Korea.

In the meantime, the Korean stock market has yet really to react to the potential for an opening up of the North Korean economy and a related investment cycle. This is no longer a zero possibility, and it is potentially a huge opportunity for Korea’s corporate sector which has not had a domestic investment cycle since the Asian Crisis 20 years ago.

Still, it is potentially more of a North Korea opening up story than a unification story since Kim is surely not going to preside over the demise of his own dynasty. Unification only happens in the event of a North Korean collapse and that, if anything, has become less, not more, likely. The South Korean stock market is certainly not priced for any such ‘opening’. The MSCI Korea index now trades on 9.1x 2018 consensus forecast earnings based on forecast earnings growth of 16% (see following chart). 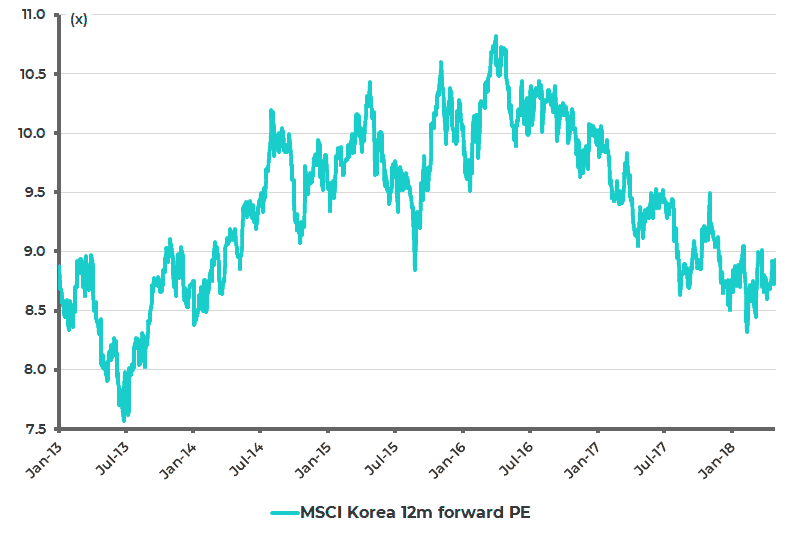 Meanwhile, the China International Travel Service (CITS), the Chinese state-operated travel agency, reopened sales of Korea packaged products in March for Chinese tourists from the Beijing area. This has been taken as a signal that inbound Chinese tourist traffic is about to pick up, a development which seemingly coincides with the easing of tensions on the Korean peninsula.

Mainland China tourist arrivals declined by 48.3% YoY in 2017 and were down 30.5% YoY in the first three months of 2018 (see following chart) as Beijing turned off the human flow in March 2017 after South Korea’s previous government, much to China’s anger, agreed to allow the setting of the US Terminal High-Altitude Area Defence (THAAD) missile facility in South Korea to counter the North Korea nuclear threat. 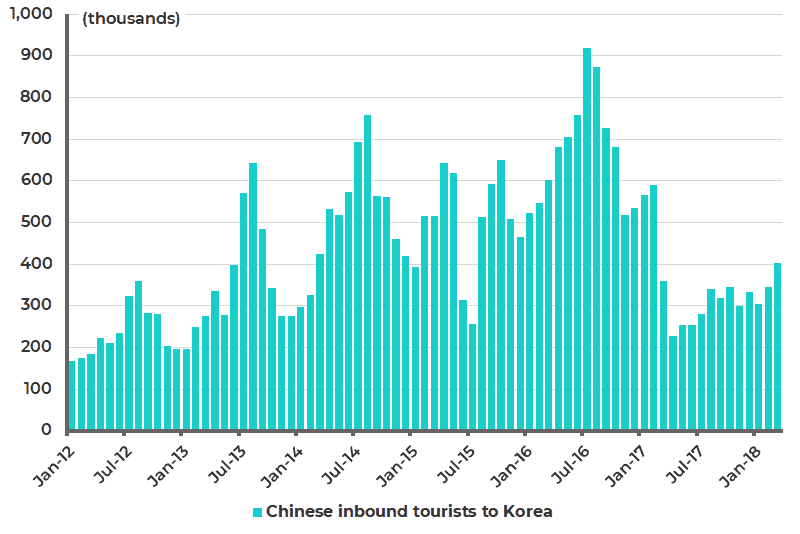